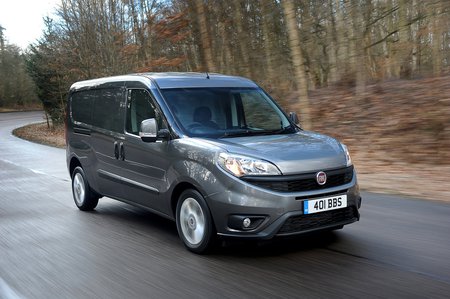 The stylish new Fiat Doblo van, now commanding an 8.9% share of its market segment, was given its UK debut at the CV Show in April 2015. Fiat is aiming for a 10%-plus stake of the market with the Doblo and, on the evidence to date the product is well placed to continue its market growth.

Sure, last year’s launch of the Ford Transit Connect and the impending arrival of the new Volkswagen Caddy, will give the Fiat Doblo a run for its money, but this product, first launched in 2000 has now come of age and is proving popular with fleets and small traders alike. The 2015 model range covers load volumes of 3.4-5.0cu-m through four van versions – Standard, Maxi, High-roof and XL – with top payload of just over a tonne available on all four versions. In addition to the van versions, Fiat also has a pick-up (the Doblo WorkUp) and chassis-cab version of the new Doblo available. Bodybuilders will be pleased to learn the new Doblo chassis-cab has no modification to the chassis, ensuring bodyfittings remain the same across the model change.

The styling of the vehicle gets a decent makeover with a redesign at the front-end improving the looks of the vehicle: The headlights are revised and mounted a bit higher; there’s a bigger grille to enhance cooling and a wider bumper completes the changes. In left-hand-drive models thecabin area gets a full makeover, though here in the UK we have to make do with a carry over from the previous range, which is a pity. Fiat has apparently taken the view that they would prefer to remain cost competitive than add expense and, in fairness, there isn’t a lot wrong with the current layout and controls.

Under the bonnet, Doblo gets its power from a range of diesel engines available in four variants: 1.3-litre at 90hp; 1.6 at 90 and 105hp and a 2.0-litre motor offering 135hp. A 1.4-litre, 95hp petrol motor completes the power line-up. A Comfortmatic auto transmission is available with the 90hp 1.6-litre motor, all other versions have five or six-speed manual gearbox options. Elsewhere on the driveline Fiat has added Traction+ to the Doblo for the first time. Aimed at improving handling and safety on uneven ground the system uses electronics to control the differential, transferring torque from a spinning drive wheel to the one with the best grip. There’s no weight penalty and it operates at speeds up to 19mph.

While the Warwickshire terrain of our driving route didn’t give us the opportunity to put the Traction+ to the test, we did get the chance to give a number of versions of the Doblo a decent drive across a variety of road conditions and we’re pleased to report the Doblo gave a strong account of itself.

We’ve always liked the proportions of the Doblo – while appearing compact from the outside, the design of the interior ensures both the driver and loadspace area are maximised. As a result you always feel like you have plenty of space behind the wheel of the van. Our first drive was in the short wheelbase version, equipped with the little 1.3-litre diesel motor – it’s actually a 1,248cc – offering 90hp and 200Nm of torque transferred to the front wheels through a five-speed transmission. These little motors pack a real punch giving good response and delivery of power through the driving range. Fiat has improved the torque response by 40% across the engine range and you do notice that under your right boot across all engines. Sure the 1.3-litre motor isn’t going to give you the sparkling performance of the bigger capacity engines, but for the majority of applications this set-up will be more than capable.

Next up was a bigger version of the van, on the long-wheelbase platform equipped with the 1.6-litre engine at 105hp. Our example had a six-speed manual and with nicely spaced gears and a bit more get up and go under our right foot, we were soon nipping around our route. The Doblo has a good assured feel on the road, giving maximum confidence behind the wheel. Improvements to the interior noise levels – Fiat reckons noise is down by 3dB(A) – ensure the Doblo gives great driving comfort.

Of course, we’d have liked the UK versions of the Doblo to have benefitted from the full makeover treatment as our European cousins and it’s a pity the dash hasn’t had a revamp to match the outside and engines. That said, the Doblo remains a thoroughly capable product and the improvements to the driveline gives Fiat the armoury to continue its battle with the likes of Ford, VW et al.

For our money, Fiat’s Doblo is on the top three of vans in this medium van segment and should force it’s way onto most shortlists.