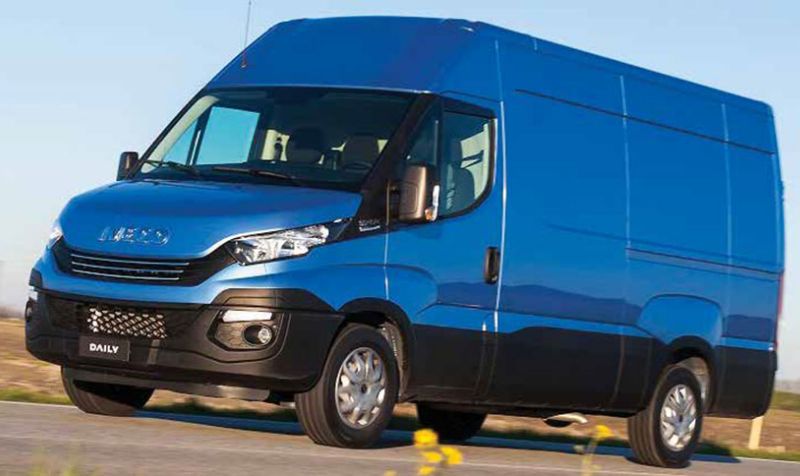 When Iveco launched the new Daily in 2014 they did so by splitting the range in two, creating a distinction between the lighter vehicles up to 3.5-tonnes and the heavier vans weighing in at as much as 7-tonnes. It was a single van with a dual purpose. But one thing that got lost in the launch was the addition of an automatic gearbox.

The Daily had previously had an automated manual gearbox among its options, it was called the Agile and it was anything but. The shift was slow, it was ponderous, it was terrible. Fortunately when Iveco rolled out the new look van, they replaced the lethargic Agile with an athletic Hi-matic transmission. Made by ZF, the Hi-matic features in a range of Fiat Group cars including Maseratis and Alfa Romeos, and now the Iveco Daily thanks to changes to the Euro-6 engine and unprecedented levels of demand from customers.

What engine does the Iveco Daily have?

Lets focus on the engine first. The range is split in two between the light duty 2.3-litre engine and a more powerful 3-litre. The smaller capacity engine gets three outputs of 116hp, 136hp and 156hp, all of which get the option of a manual or automatic transmission. Simple so far, but the larger capacity engine range is less straight forward with three different power outputs of 150hp, 180hp and 205hp with the 150 available only as a manual, the 180 getting the option of both, and the 205hp (badged 210) limited to just the Hi-matic auto.

There is one key difference, in the short term, between the two engines: 2.3-litre engines do not need SCR technology to meet Euro-6 emissions. The F1 A engine uses a low pressure EGR system to meet the required standards, while the 3-litre F1 C engine requires SCR technology. That will, however, change in early 2017, when non-SCR engines will be dropped and the AdBlue dosing system added to the F1 A engine will improve its emissions further still. This, Iveco hopes, should see them comfortably meet any future Real Driving Emissions regulations that are still under discussion.

Despite looking to maximize efficiency and emissions, the 2.3-litre engine is still a powerful beast and a test drive in the manual 136hp van (badged as a 140) found the unit was smooth and impressively torquey with 350Nm available at low engine speeds. It was surprisingly quiet at higher speeds and was comparable to the 150hp and 350Nm 3-litre unit in responsiveness and refinement.

Is the Iveco Daily Hi-Matic good to drive?

Visually the Euro-6 Iveco Daily is indistinguishable from the Euro-5 models, but a big change can be felt from behind the steering wheel in the Hi-matic models. The new 8-speed transmission is a first for the sector, and is said to provide “absolute driving pleasure”. How pleasurable driving a 3.5-tonne van can be is open for debate, but the gearbox certainly removes a lot of the stresses of driving. Unlike the Agile gearbox it replaces, the changes are quick. And not just for an automated manual transmission. The 200 millisecond shift time gives the dual-clutch gearboxes of the Volkswagens a serious run for their money, and it does so with intelligence and smoothness. Too often an automatic gearbox will shift when it wants to, upshifting too late or downshifting too eagerly, but the Hi-matic seems to have mastered the art, changing gears at an optimum time to suit both comfort and economy. Iveco says the Euro-6 Daily is up to 8% more fuel efficient than the Euro-5b+ model thanks to a variable displacement oil pump, variable geometry turbo, reduced engine and axle friction and lower engine weight. But they are also claiming a 10% reduction in maintenance and repair costs thanks to the new transmission.

As with the previous Daily the front axle plays an important part in the road manners of this van. The Euro-6 model keeps the same revised steering geometry found in the update to the Daily in 2014 that was designed to help minimise oversteer and improve comfort. Vans below 3.5-tonnes get a new Quad-Leaf suspension, which not only improves the ride quality, but also adds measurably to the feedback from the road. While higher GVW Dailys get a torsion beam solution to allow them to carry as much as 2.5-tonnes on the front axle of 5-tonne GVW or higher models, and 2.1-tonnes on 3.5- to 5-tonne variants.

Now coupled with an engine designed specifically for the automatic transmission, the Daily should be at the top list of any buyer looking for a two-pedal van. In fact the new gearbox is already making headway with customers, as being able to fine-tune the vehicle’s behaviour according to individual needs has meant Iveco has been able to customise transmission datasets in order to help optimise fuel consumption on everyday routes – something long standing Iveco Daily customer Tesco has been benefiting from.

Powerful engines and automatic transmissions often do not work well together in commercial vehicles, but the 3-litre 205hp unit returns a smooth and effortless ride. Progress is alarmingly brisk and not marred by any of the usual jolts you find when autos attempt to change gear while accelerating hard. Instead the Hi-matic rapidly carries out the change and the powerful engine, with 470Nm of torque is free to rush its way towards the next gear change. In a 3.5-tonne panel van, the most powerful engine output seems excessive, but as Iveco expects to sell as many units above 3.5-tonnes as it does at or below that weight, the higher power can be justified. Nevertheless, a test drive of the 4x4 5.5-tonne Hi-matic chassis cab with 180hp and a 50% payload showed that even in a vehicle plated and operating at a higher weight, the middle of the range power option with 430Nm of torque are more than enough for on- and off-road work.

Despite the outside not being changed – Hi-matics will get chrome highlights on the grille but we hardly think that counts - there has been some changes to the interior. Hi-matic models get a new blue section to the dashboard that looks elegant and pairs nicely with the newly textured blue seat backs and cushion. They’re not revolutionary changes, but they don’t need to be, as the Daily’s interior is comfortable, ergonomic and well designed. The dashboard cluster is nicely illuminated and the central column neatly houses infotainment and climate control functions. It feels rugged, but looks sophisticated. Immediate storage around the drive could be improved as there is just a cup holder in the vicinity, but with 18 stowage points in total, there is a lot of space. The most significant change is the introduction of a tablet holder in the top section of the dash. The holder itself isn’t ground-breaking, although it does do a good job of securing devices of differing sizes. What is important about the holder is that it allows the device to become part of the vehicle. To aid the integration, Iveco has developed a new Business Up app interface.

Rather than charge customers for connected systems that quickly become out of date, Iveco has taken the decision to allow the customer to use their own device. In doing so they have developed an app to provide real-time monitoring and diagnostics. A business user can pair up a mobile phone to get audio and visual messaging alerts, and use the app’s built in navigation and fleet tracking systems. It connects via the Bluetooth DAB radio, and once the device is paired, automatically syncs to the vehicle to provide extended dashboard information and lots of additional information like the interactive user handbook. The scheduling and tracking service is a cost option, but by removing the need for multiple devices and hardwired installation, the Daily should be fully connected and up and running on a fleet in record time.

Should I buy an Iveco Daily Hi-Matic auto?

Iveco has long maintained that its automated transmissions were the best bet for multidroppers like supermarkets, and with the absence of any decent competition they were probably right. However, the Agile was about as supple as a corpse and responded only fractionally quicker. The Hi-matic is in a different league to its predecessor, and is at a push the best auto on the market. While the Volkswagen DSG is almost certainly smoother, the double clutch system adds expense and future reliability questions, making the Hi-matic a gearbox better suited to intensive stop and start and the rigours of a daily workload. When you factor in the costs of decreased maintenance and that the new Euro-6 engine has improved economy, the case for buying an automatic Iveco begins to stack up. If you want a large van at 3.5-tonnes it’s a solid wildcard option, if you’re looking for something over 3.5-tonnes it should be in your top three, and if you want an automatic it's your only choice.