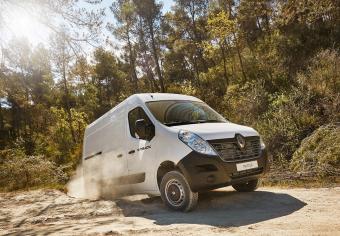 Automotive manufacturers are increasingly become experts at finding new niches to align their products to, and Renault is no exception with its new range of off-road vans.

Three new enhanced grip models have been introduced to their LCV range, each offering a different level of traction for increasingly challenging conditions. Beginning the range is the Grip Xtend system, an advanced traction control system for slightly tricky surfaces. Next comes X-Track that allows vehicles to venture even further through the addition of a limited slip differential.

Completing the range of off-roading Renaults is a new 4x4 version of the Renault Master.

The entry-point to Renault’s off road vehicle capabilities is Grip Xtend, a feature that is now standard on Kangoo, Trafic and Master vans, and designed for occasional use on slippy surfaces. Think of it as the beginner off-roader in the range, best suited for a bit of gravel road, or a slightly muddy farm track. It uses an advanced traction control system that can be activated at speeds of up to 31mph, the idea being that it improves traction at low speeds allowing the vehicle to move away without wheel spin.

Traction control normally prevents the wheels from turning the moment is detects slipping and often reduces power too. Extended Grip instead allows the wheels to continue to rotate in order to clear any snow or gravel and find additional traction on the surface below. While most vans in the Renault range come with standard road tyres, customers planning to make use of the Extended Grip feature can specify vans with all-weather (mud and snow) tyres to improve performance in low grip conditions.

The system is fantastically effective on our dusty test route, spinning its wheel continuously and allowing us to scrabble up several steep inclines that without the system engaged saw the traction control light illuminate and power curtailed. While it’s obvious that something is working, there isn’t an obvious feeling that electronics are battling in your favour.

The system is fantastically effective on our dusty test route

Renault admits that this may not be a big seller. In fact, they’re predicting modest sales not only of the X-Track versions of Kangoo, Trafic and Master, but also the new Master 4x4. Off-road products are not Renault’s forte, but their theory is that in having more diverse products available they will be able to cater for a wider range of customers who may look elsewhere for these solutions.

So while, ambitions of only a few hundred units may prompt people to question why go to the trouble, the answer is that products like X-Track and 4x4 Master may ultimately help retain customers. X-Track conversions offer a more capable solution to off-roading than the Grip Xtend vans, but without going to a complete four-wheel-drive model. This obviously means a cost saving compared to a 4x4, but there has still a number of changes that need to be made to the vans with the addition of a Limited Slip Differential, raising the ground clearance, adding underbody protection and fitting all weather tyres as standard.

The resulting product is noticeably more efficient and fuss free than the Grip Xtend versions, and in our Master van test vehicle steep hills and gravelly descents were so comprehensively dealt with by the X-Track that as a blind folded passenger you would be forgiven for thinking we weren’t driving in off-road conditions.

Completing the range is the new option of a four-wheel-drive system for Master vans. The 4x4 transmission is a factory approved conversion from Oberaigner which not only adds drive to all four wheels, but uprates the suspension and increases the vehicle’s ride height. Drivers can select 4x2 mode – with power sent to the rear wheels – for driving on normal roads to reduce fuel consumption, and then switch to 4x4 for off-road usage.

Coupled with the Grip Xtend function, it makes for a powerful and effective system that breezed up and down some seriously steep loose gravel test hills.

With little in the way of competition, you’d think this would be a growth area for Renault but expectations are modest. Like the X-Track, Renault see the option of four-wheel-drive more as a convenience for their customers rather than a new market to target. Rather than actively push the product they hope the 4x4 Master will consolidate its position amongst existing fleets, providing them with a new offering and preventing their eyes from wandering elsewhere.

For the UK, enhanced traction vans are usually the preserve of local councils and telecoms engineers. That will probably remain the case, but with the basic Grip Xtend functions becoming standard features Renault has rolled out a useful feature that regular buyers will benefit from.

Whether or not the impressive X-Track and more specialist 4x4 Master will gain traction [excuse the pun] in the UK remain to be seen, but the option is now there. Having culled its range four years ago, the Renault van portfolio is now growing in a new an exciting direction. Instead of sales volumes being the target, customer satisfaction and demand are now a key priority.

With so many joint-engineered products in its range, we’re hoping off-roaders are just the beginning of Renault carving out its own little niche.

Price: £ to £
Fuel economy: to mpg
Power: hp to hp
Torque: Nm to Nm
Payload: kg to kg
Volume: to m3
Loadspace Max: to mm
Things We Like:
Fuss free off-roading
Things We Like Less:
Feeling of fighting against electronics
Ratings:
Overall: 7/10