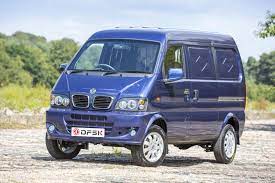 There is something about the DFSK Loadhopper that doesn’t quite sit well with a UK audience. During our test drive, many fingers were pointed and some laughter was heard in our general direction, but given the demise of the minivan, the Loadhopper’s silhouette is an uncommon sight.

Of course the startling resemblance this Chinese import’s front end bears to older products from a certain Bavarian car manufacturer may have contributed to the sniggers, but coincidental similarities aside, it is still a fairly ugly and unusual creation. Imported by Swindon based Vestatec, the UK Loadhopper range is made up of single-cab, double-cab, tipper and panel van models, the latter of which is tested here with a 1-litre petrol engine.

Priced at just £8,495 (some £3000 less than the next most affordable van in it’s “class” the Peugeot Bipper), there are understandably some compromises; the Loadhopper is powered by a pathetically feeble (and extremely noisy) 1-litre petrol engine, producing just 52hp and 78Nm of torque. Performance, as a result, is virtually non-existent, but what little power generated is delivered through a five-speed manual gearbox to the rear-wheels.

The Loadhopper’s centre of gravity is quite high, and the traction afforded by the skinny tyres doesn’t inspire confidence. Fast cornering therefore requires faith and courage, but when done smoothly (no easy task with the light and woolly steering) can be bizarrely rewarding. Straight-line speed is an issue, unless you want to wear ear defenders and wring the Loadhopper’s neck, but around town, and when not in a hurry, the Loadhopper is comfortable tottering about.

The suspension setup is fairly firm, and little difference is made with or without payload, but the DFSK rides out the bumps with a minimum of fuss. It is arguably its finest point, but still not close to an acceptable level of comfort. It all sounds fairly negative, but in truth it is still a decent van, and you get a lot of capacity for your money. With a loadspace measuring 1,940mm x 1,300mm x 1,210mm in length, width and height, there is 3.2m3 of load volume and a maximum payload potential of 548kg in the ply-lined rear deck. The well being of the driver, however, should not be overlooked, and unfortunately the DFSK has little to be optimistic about.

The quality of the interior is reflected in the price, and is made of what you might think are typically Chinese plastics - perhaps best reserved for the abundance of robust consumer electricals manufactured in the country. However, it feels strong enough to withstand a tough working life, and at this price that is all you can expect. There is a decent radio – which you’ll need to drown out the noise – an engine immobiliser and central locking, but material quality and comfort are lacking in every aspect. Although the seat can be moved a good distance from the wheel it is basic in the extreme, and isn’t properly aligned with the pedals and steering wheel.

Visibility through the wing mirrors above town speed can also be very difficult due to wobbling, and the lack of a wiper blade on the glazed rear window doesn’t help the view to the rear either in winter conditions. Nevertheless, we can see a market for the Loadhopper in small communities where journey times are short and requirements basic. But, as a modern van for the modern metropolis it falls drastically short, and on the motorway it is entirely inappropriate.

It’s too noisy, and the driver feels too vulnerable, but we are sure this won’t be the situation with Chinese vans for long. The unusual pressings on the loadspace’s body panels are perhaps prophetic of a van that will one-day emerge. The Loadhopper is a rough diamond that will, one-day, come good.