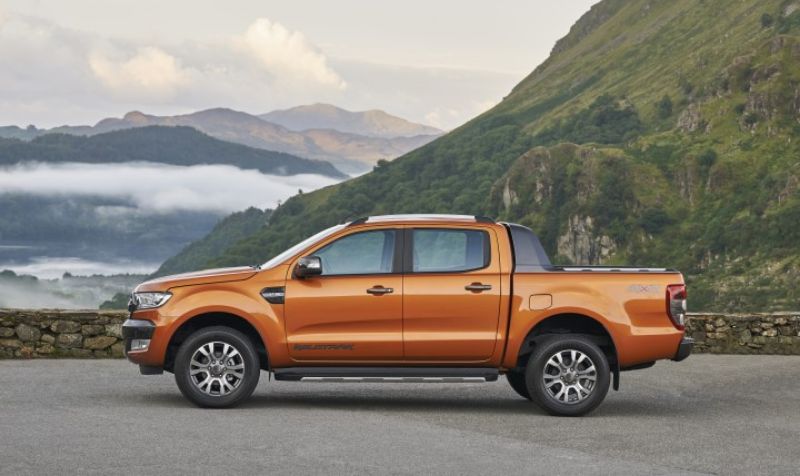 Since its rebirth in 2011, when the Ford Ranger was made more muscular and macho-looking, the model has enjoyed some surprising levels of success. Since then, demand for the Ranger has been relentless, but it was supply that was the problem. With vehicles coming from the production site in South Africa, the European market – particularly the UK with its need for right-hand drive – suffered initially. Order, and orders, have been restored and the Ranger has rocketed to the top of the pick-up sales charts, becoming a favourite ahead of staples like the Mitsubishi L200 and the Toyota Hilux, which only received updates in late 2015 and mid-2016 respectively.

Ford has facelifted its prize workhorse, adding Euro-6-compliant engines and a reworked interior. The result is an even more brash, bold and (if we’re being completely honest with ourselves) desirable pick-up truck. The basics are the same with regular (single) cab, super cab and double cab body types, paired to 2.2-litre or 3.2-litre diesel engines with a 6-speed manual or 6-speed automatic. Power ratings on the 4-cylinder 2.2-litre unit have increased to 128hp with 330Nm and 157hp with 385Nm, while the 5-cylinder 3.2-litre unit is the same with 197hp and 470Nm of torque. Models come with the option of selectable 4-wheel-drive and transfer box, allowing rear-wheel drive and 4-wheel drive in high and low range, but 2- and 4-wheel-drive only versions are also available.

Is the Ford Ranger interior any good?

Dimensions are mainly unchanged, except for a few millimetres in overall height, width and length with the loadbed remaining the same. Single cabs get a usable length of 2,317mm, super cabs a 1,847mm deck and double cabs 1,549mm, with a maximum width of 1,560mm and a distance of 1,139mm between the wheel arches. Payloads vary depending on configuration, but single cabs can carry 1,269kg, super cabs a maximum of 1,230kg and double cabs from 1,033kg to 1,098kg. Towing capacity tops out at 3.5 tonnes, while the roof can support an 80kg load.

Trim level names remain the same, so the range starts with the entry-level XL, progresses to XLT and then steps up a gear to Limited. Wildtrak is top of the tree and only available as a trim option on the 3.2-litre engine models, where it adds orange stitching to the dash and the chromed grille gets replaced with a matte-look grey front.

Despite many pick-ups being bought for their favourable benefit in kind tax rates, usability remains a priority for these off-roaders. The Ranger can claim a class-leading wading depth of 800mm – the latest Toyota Hilux has a depth of 700mm – but due to its bulky frame and 230mm ground clearance has a lower approach angle of 28 degrees compared with the Hilux’s 31 degrees and 279mm ground clearance. Although hampered fractionally by its size, the Ranger is still a formidable off-roader and has an arsenal of features to make 4x4 driving simple. Hill descent control, hill start assist, trailer sway control, load adaptive control, emergency brake assist and roll-over mitigation all help when the road gets bumpy, along with traction control and electronic stability control systems that make extreme conditions easy work.

Is the Ford Ranger good off-road?

Barring the occasional bit of rubbing on the side steps (standard fit on Limited and Wildtrak models) you would be hard-pressed to identify any weaknesses over the rest of the competition when in the dirt. The suspension, chassis and electronics combine brilliantly to keep you moving, and the cabin comfort keeps you feeling safe and well-insulated from whatever perils you might face.

Visibility is not as good as some of the competition – the Ranger is a big vehicle to keep an eye on in confined spaces like a forest, and large A- and B-pillars prevent clear lines of sight. The long, sloping bonnet also makes forward distances hard to gauge, particularly as there are several millimetres of vehicle still in front of you after the bonnet nosedives to join up with its aggressive front grille.

Is the Ford Ranger good to drive?

Visibility is less of an issue on the open roads, but that bulky A-pillar still hampers the forward view a fraction. Nevertheless, the Ranger is a fine machine to drive; its handling and suspension working in collaboration to give you a comfortable but engaging ride.

The 2.2-litre engine is the choice for those looking for decent fuel economy, with the most frugal example returning 46.3mpg, but despite an increase in power and torque, the lacklustre amounts of pull in the 128hp model with 330Nm is particularly noticeable. The higher-powered 157hp model with 385Nm is a better option and has closed some ground on the powerful 3.2-litre unit. Whether you need 197hp and 470Nm of torque may depend on what you are towing and up which mountain, but for ordinary driving, the occasional heavy load or trailer pull, the higher-powered 2.2-litre is the pick of the range.

What's the fuel consumption of the Ford Ranger like?

A claimed improvement in fuel economy is one of the most noticeable benefits of the switch to Euro-6 engines in the Ranger. The most efficient models have a claimed fuel economy of 43.5mpg and carbon emissions of 171g/km, while average fuel economy has increased by 17% thanks to the inclusion of Start-Stop and more economical final drive axle ratios on selected models. Of course, reaching such heady consumption figures often proves difficult. While testing a partly loaded Ranger Wildtrak 3.2-litre Auto we regularly saw no more than 27mpg on A-roads and motorways.

However, the 3.2-litre Wildtrak models are a laugh-riot: they’re so over the top you can’t help but enjoy the power and noise. Even at nearly 2.2 tonnes, the urgency with which the Ranger gets off the line is impressive, recording 10.6 seconds in the 0-62mph dash. That’s with the automatic transmission, and it is without doubt the transmission of choice in the Ranger. The wealth of power is delivered comfortably through the 6-speed auto box, with smooth changes. In contrast, the manual 6-speed is coarse and the transmission jars and jolts at the excessive torque coursing through its cogs. It doesn’t make the Ranger unpleasant to drive, but it takes the shine off the ride, and having experienced the auto you would be foolish to opt for the manual – particularly if you want a road-based vehicle.

There’s plenty to like on the new Ranger, with its modern styling and uprated engines. Unlike other models, the range is well-balanced between the workhorse XL and XLT, the mid-range Limited and the ultra-desirable and lifestyle-orientated Wildtrak. With two engine options – again a rarity in the sector – Ford has catered for a wide range of customers, and the sales volumes reflect that.

Should I buy a Ford Ranger?

Where once the Hilux and L200 were the names to drive and own in the pick-up market, upscaling equipment and expectations means the new names on the block are Ranger and Amarok. Others may do parts of the job better – Nissan’s Navara is better if you want three or four passengers thanks to its multilink rear suspension.

There are cheaper options, like Fiat’s Fullback or SsangYong’s Musso, but for now, Ford has the upper hand in the UK. However, when V6 Amarok models arrive in 2017, the Ranger’s position as pick of the pick-ups may come under scrutiny. Until then, it’s got the world at its feet.