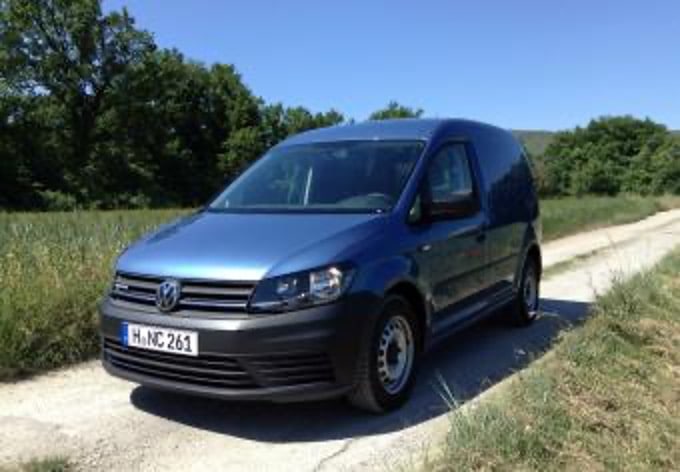 It would be unfair to say that the Volkswagen Caddy has stagnated but it has started to look a little dated, such is the pace at which the rest of the small van market has developed. It has been a considerable amount of time since VW’s smallest van has had a refresh, but the dawning of Euro-6 has given the German manufacturer the perfect opportunity to revamp the model and in doing so begin the domino-like knock-on of redesigns that will see the Transporter, Amarok and finally all-new Crafter brought up to code with a new harmonious family face.

Accord of this type, from a design point of view, very rarely happens, especially in the commercial vehicle world, so getting it right straight out of the gates with the Caddy is particularly important.

Pictures of the Caddy have already been released, so it comes as no surprise seeing it in the flesh, but away from the bright stage lights and meticulously lit studio photographs the new Caddy cuts a sophisticated look in the sunlight. It is very much recognisable as a Caddy, the changes are far from revolutionary, but it looks more grown-up whilst being less friendly and inoffensive as the older model. It’s subtly aggressive, a look that should translate well in to the sportier versions of new Transporter models. The noticeable changes, however, are largely consigned to the front, with the exception of the rear light cluster which like the headlights now incorporates LEDs.

The real alterations to the Caddy aren't visual, they are to be found under the bonnet and in the brains of the beast, with new Euro-6 engines that claim greatly improved fuel economy and a whole host of clever technology and safety upgrades once only found on passenger cars.

First to the engines, four new diesel options, all using the same 2-litre four-cylinder engine, occupy the range with 74hp, 100hp, 121hp and 147hp units. These oil burners now also appear alongside a 1.2-litre petrol engine offering a power output of 83hp, a 1.4-litre 123hp petrol and an all-new 1-litre, three-cylinder TSI engine producing 100hp. Petrol vans aren’t a big seller in the UK, but the TSI three-cylinder has been introduced in direct response to Ford’s three-cylinder Ecoboost unit found in the Transit Connect.

The technology on board starts with a stop/start system, that is now standard on all models, prompting VW to claim a 28% reduction in fuel consumption across the range at the time of the Caddy’s first reveal. Additional technology includes the aforementioned LED headlights, an option on all but the higher end of the passenger vehicles, and Light Assist that switches off the headlights’ main beam when a vehicle approaches. Safety, however, is the byword of the new Caddy, with City Emergency Braking, and a driver alert system two of the most major new upgrades. City Emergency Braking is designed to limit the impact of an accident or prevent it altogether through the use of radar and automatic braking, and while we don’t recommended testing the functionality it does prove useful in avoiding those slow speed, lack of concentration bumps people often have in car parks or at roundabouts.  The driver alert system, which too is rather hard to test (or even trick) due to its clever behavioral analysis, recognises any deviations from normal driving behavior in an effort to warn the driver when they are at risk of having an accident. More straightforward, but no less important, is Adaptive Cruise Control (ACC), which is available as an option and monitors the vehicle in front to maintain your desired cruising speed and a safe distance. Four selectable distances can be chosen, none of which you will be pleased to hear come anywhere close to the typical white van level of tailgating.

Without driving old and new back to back it is hard to ascertain precisely what has changed in the new Caddy, but one thing that is for certain is that this latest generation is an awful lot quieter. It’s immediately noticeable from the moment you turn the key.  We drove the 74hp, 100hp and 147hp versions of the diesel unit, and each proved themselves to be efficient, with plenty of torque and were extremely quiet.

While the test vehicles were unladen, the 74hp unit showed an eagerness in the early part of the rev range that suggests it would not pose a problem to drivers operating at close to maximum payload. The 147hp unit is ferociously quick for a van, and while we did experience some torque steer and found the traction control regularly chiming in when taking the Caddy from a standstill, thanks to the six-speed gearbox it is a smooth cruiser at motorway speeds. From our limited driving time, however, the pick of the bunch would appear to be the 100hp unit. It blends power with refinement and although it could do with the sixth ratio found on the more powerful Caddy, it still proved a quiet, comfortable and relaxing drive.

Each of the panel vans we tested came with a fixed bulkhead, whereas in the UK a lot of Caddy vans are fitted with mesh partitions which has led to comments about the swimming pool sloshing sound caused by fuel splashing up the next of the filler pipe in the old Caddy. Yet, in the passenger version of the Caddy this sound was not apparent. Could VW have cured the noise? Lets hope so.

In summary, the new Caddy is a serious advancement over the outgoing model. Its rammed full of technology that will make any driver who spends a long time behind the wheel hugely appreciative of the systems. Comfort has certainly been increased and the styling of the cabin and outside have been lifted to update it and make the vehicle feel much more modern.

It is then, business as usual for VW with the new Caddy. It’s not rocked the boat, but we expect they won’t be able to get them on to dry land in the UK quick enough.