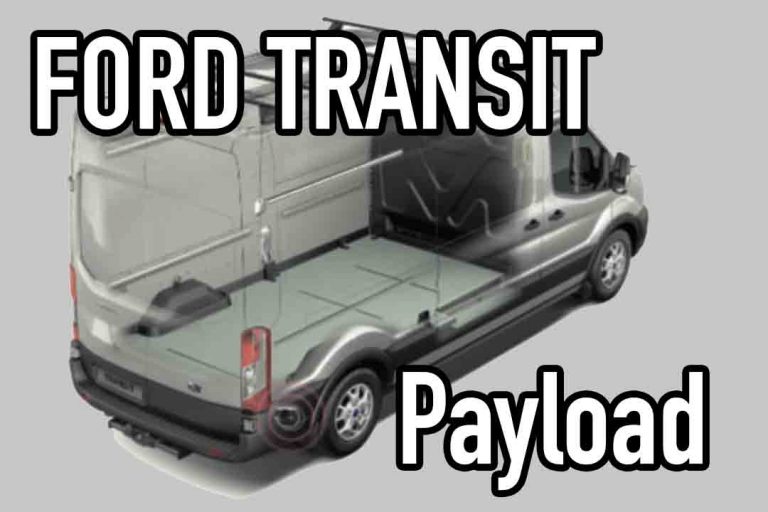 These are all essentially the same question that you want to know about and you’ve found the right place to get your answers on van payloads.

Take a look at our Ford Transit payload guide to find out what the payload of a fourth generation Transit is.

Typically, the question you have come hear to find out is…

How much weight can a 3.5-tonne Transit van carry?

The answer is 1110kg and 1472kg which excludes the weight of the driver but including all necessary fluids and 90% fuel.

If that’s answered your question, great – glad we could help, but its actually a bit more complicated than just a straightforward number.

It’s all logical when you know.

Because of the very different plated weights there is a large range of what payload capacity the vans have and how much payload weight your Ford Transit can carry. But, we’ll try to spell it out for you according to Ford’s latest Transit van payload specs.

That’s the basics and the reason for the wide range is because you can have a Transit van at those weights in a number of different body sizes from short-wheelbase to extra-long-wheelbase. If you want to know more about the Ford Transit dimension take a look at our guide.

What is the Ford Transit payload of a rear-wheel-drive van?

They are also only the numbers for the front-wheel-drive models. If you have a rear-wheel-drive (RWD) or all-wheel-drive (AWD) Transit van you will have a slightly reduced payload because of the added weight and complexity of the driveline.

Rear-wheel-drive vans are only available as Transit 350 models and their payload weight capacity ranges from 1110kg to 1385kg, but as a general rule of thumb they are 80kg to 100kg lower in their payload than the front-wheel drive models. There’s also a Transit 470 with a 4.7-tonne gross vehicle weight (GVW) and payload of 2209kg.  The largest Transit van, the Transit 500 has a payload of 2383kg.

The same is true of the all-wheel-drive vans. They drop the payload by 100kg from the front-wheel-drive vans and range from a payload weight capacity of 1172kg to 1279kg.

Take a look at the table below which will give you all of the Transit payload spec for each panel van variant.

What about Transit axle weights?

If you put a pallet weighing exactly one-tonne on the centre of the rear axle, you have added 1000kg of weight to the van. This is accounted for in its overall payload. You’ve also placed weight on both the front and rear axle, as the chassis will distribute the weight across the length of the van. Because it is at the back of the van, however, most of the weight will be on the rear axle, and the further back towards the rear door you put that pallet the more of the weight will be taken solely by the rear axle. This is how overloading can happen because not only is the rear axle supporting the 1-tonne pallet it is also supporting the body of the van, the engine, the gearbox and even you and your sandwiches. They all contribute to the final number on the rear axle and what you can legally carry.

What are the Transit van front and rear axle payloads and capacity?

As you can see that’s a lot higher than the payload, ratings but if you were to put the maximum 1472kg of the biggest carrying Transit right at the back of the van – maybe because you loaded it there with a forklift – then you’ve be in danger of being overloaded on that rear axle.

It’s exactly the same scenario with the front axle, but there’s even more to think about because you have the weight of the engine and any occupants to consider.

Here’s a look at Ford’s own table of weights and measures for the Ford Transit range. As with the above, this covers the UK Transit models from 2014 onwards.

What else do I need to know about payloads?

The most important thing when it comes to carrying weight in your van is to remain on the right side of the law. While we hope our guide is useful and can give you a good indication of how much weight your Transit van can carry the best way to find out how much payload your van has is to check the vehicle plate.

This is a small metal plate (or more commonly now a sticker) usually found on the inside of the driver or passenger side door that lists the GVW, payload and front and rear axle weights. On some occasions you can find it under the bonnet. Our advice... always check the plate.

Price: £ to £
Fuel economy: to mpg
Power: hp to hp
Torque: Nm to Nm
Payload: kg to kg
Volume: to m3
Loadspace Max: to mm
Things We Like:
Things We Like Less: