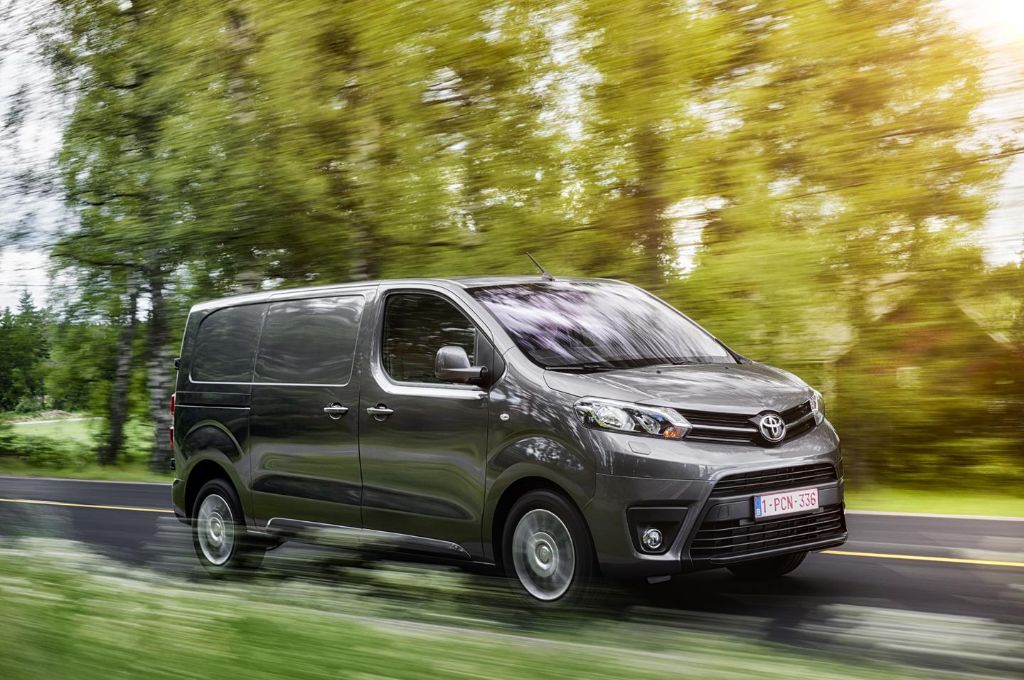 It is widely accepted that in the aftermath of a nuclear holocaust the only human being likely to be alive is Keith Richards. And if the Rolling Stones guitarist needs to drive down to his local liquor store in the hope of finding an intact bottle of Jack Daniels and a carton of Marlboro, the chances are he’ll make that journey in a Toyota Hilux pickup. You see, like himself, these rugged, go-anywhere workhorses, have proved to be totally indestructible, and the chances are they’ll be the only vehicles still capable of moving in a post apocalyptic world.

So what’s all that got to do with Toyota’s Proace, we hear you ask. Well, Toyota is hoping that its newly-launched van can play on its sibling’s strengths, cashing-in on its enviable reputation for reliability, which seems like a good plan to us. Some 90% of Hilux’s sold in the UK go to fleet buyers, and if they’ve been impressed with the truck’s famed QDR (quality, durability and reliability), there’s every chance they’ll be keen to give the Proace a chance.

But Toyota isn’t relying solely on its midsized panel van to sell itself. It tried that approach with the previous generation of Proace, and sales were negligible. This time it’s taking a far more serious approach, creating a dedicated commercial vehicle division, employing LCV manager Gareth Matthews, and training sales and workshop staff at its 80 UK business centres.

Also different this time around is the product itself. Previous generation Proace was a badge-engineered Citroen Dispatch/Peugeot Expert/Fiat Scudo. This family of vans was never great in its youth, and by the time Toyota came to the party in 2013, the elderly design was in dire need of a one-way ticket to Switzerland!

Who makes the Toyota Proace?
On this occasion, while Proace is still a joint venture with the PSA Group (Peugeot and Citroen), and indeed is built in the same French factory, Toyota was actually involved in its conception and was “able to put its own slant” on the design. This of course isn’t Toyota’s first joint venture with PSA, as its Aygo passenger car is the same basic vehicle as the Citroen C1 and Peugeot 107. The project has been a success for Toyota GB too, with the Toyota finding the most buyers and commanding the best residuals of the trio.

So what’s the new Proace like, and does it have what it takes to make Toyota a major player in the UK van market? We headed out to Finland (a strong market for Toyota, and one of the few countries in the world that actually bought the old Proace) to take a closer look at it.

By “own slant”, what Toyota means is a unique front end, giving the van its own brand identity. While beauty is in the eye of the beholder, surely we can’t be alone in thinking that this is the best looker of the three.

Shared parts include everything from the bonnet backwards. It's the same recipe used on the previous generation too, using a common platform - in this case, the new Efficient Modular Platform 2 (EMP2) used on passenger cars like the Peugeot 308 - that has been tailored to accommodate three different vehicle lengths, rather than the two found in the previous generation, with a new short-wheelbase van added to the line-up.

How big is the Toyota Proace?
This new Compact model measures 4,606mm and has a maximum storage area length of 2,162mm, while the Medium van measures up at 4,956mm with a 2,512mm load length. The largest Long van is 5,308mm front to rear and can transport a 2,862mm length. All three van lengths can be specified with the Smart Cargo system, which adds a folding front passenger seat and load-through bulkhead hatch to enable an additional 1,160mm of usable space for pipework or lengths of wood. As part of the Smart Cargo package, the middle seat folds down to reveal a “mobile office” – otherwise known as a table-top!

As well as panel van versions, Toyota will be offering a passenger-carrying Verso model, which it expects to prove popular as a taxi. A six-seat crew van in Medium or Long bodies, and a platform cab for specialist conversions, are also available.

The width between the wheel arches is 1,258mm, enabling all three models to take at least two pallets on the floor, while overall capacity means load volumes are 5.1m3, 5.8m3 and 6.6m3 for Compact, Medium and Long respectively. Vehicle height is 1,900mm for the Compact and Medium vans, this is to ensure they can fit under most car parking height restrictions within European cities, while the Long model is 40mm taller at 1,940mm.

How much weight can the Toyota Proace carry?
Depending on the model the new Proace is up to 150kg lighter than its predecessor, but Toyota is equally proud of the van's kerbweight, which gives it a best-in-class payload of 1,500kg for a 3.1-tonne van. It is also a class-leader in terms of towing, with a maximum 2.5 tonnes capacity.

Access to the business end is via a sliding side door and a choice of either 50:50 glazed swing doors or a hatchback at the rear.

How powerful is the Proace van?
New drivelines also form a big part of the update to the Proace, with a choice of five power ratings. The 1.6-litre 95bhp entry-model available as standard with a 5-speed manual gearbox, but with the option of a robotised auto. There's also a higher-powered 115bhp version that Toyota expects to be the UK’s biggest seller. This one is only available only as a manual.

A larger capacity 2-litre engine also features in the range with three power ratings of 120bhp, 150bhp, and 180bhp, providing maximum torque outputs from 210Nm to 370Nm. Buyers have a choice of a 6-speed manual gearbox, or in the case of the most pwerful version, an automatic gearbox and steering wheel-mounted paddles for changing gear.

Fuel economy has improved significantly in the new range, and the most fuel efficient engine is the 114bhp 1.6-litre returning a claimed 55.3mpg on the combined cycle and CO2 emissions of just 133g/km. The entry-level 94bhp engine with manual transmission returns 51.3mpg, while the range-topping 178bhp engine is good for 46.3mpg.

All these Euro-6 engines use AdBlue in the new exhaust gas after-treatment system that uses Selective Catalytic Reduction (SCR) to remove particulates from the tailpipe emissions. The Proace has a 22-litre AdBlue tank that should be enough for around 9,000 miles.

What's the Proace like inside?
The restyled front end is an obvious change, but it is in the cabin where you will invariably notice the biggest changes to the new Proace - not least because the dash has been totally redesigned.

Storage is fairly generous for a mid-sized van, with two gloveboxes and a large A4-sized open compartment on top of the dashboard. Door bins are large enough to hold water bottles, while there are two cup holders located centrally. Concealed storage can also be found beneath the passenger bench seat. Toyota reckons there’s adequate seating up-front for three adults, but we beg to differ. The restrictive bulkhead means tall drivers might struggle to get comfortable, and unless your middle passenger is a close friend of Snow White, they’re going to find it rather cramped.

A neat option is Toyota’s Traction Select dial. Described as a “smart differential”, it has three specific modes for driving on snow, mud and sand. It can also increase the van’s ground clearance by 25mm, improving access to worksites.

Is the Proace good to drive?
Cosmetically and practically, the new Toyota Proace has benefitted enormously from the refresh, but it has also improved immensely in the way it drives. The new 2-litre engine with 180hp and 370Nm of torque feels comfortable both pootling around built-up areas and at cruising speed on a highway. Engine noise is also considerably lower than in the previous model. But it is the 1.6-litre with 115hp that we would opt for as our engine of choice. Not only does it return the best fuel economy, its power delivery is smooth and refined with no noticeable flat spots. It will reach 60mph in 13.4 seconds, which is almost identical (13.3 seconds) to the 122hp version of the 2-litre. It certainly made light work of our 400kg load.

The Proace’s handling has improved too, and the overall feel you get from the road is far greater. The old model was quite bouncy at main road speeds and the steering felt far too vague, but now the latest version has a firm grip on the road and the connection to the wheels feels a lot more certain. The Proace can thank its passenger car underpinnings for this, which make for a composed and comfortable ride, decent seating position affording a good view ahead and decent support for your thighs and lower back. We like the driver’s folding armrest too, and comfortably wide window ledge to rest your right arm on. At 3.1m, the van’s turning circle is superb too. The only real criticisms we have from our drive around Helsinki are that the mirrors are too small, and lack a wide-angle section.

So far we are impressed with new Proace, and believe it has what it takes to stand proud alongside the mighty Hilux in Toyota showrooms. But of course, only time will tell whether it can match its sibling for QDR.

Looking for more van reviews? Read our review of the Volkswagen Transporter 6.1