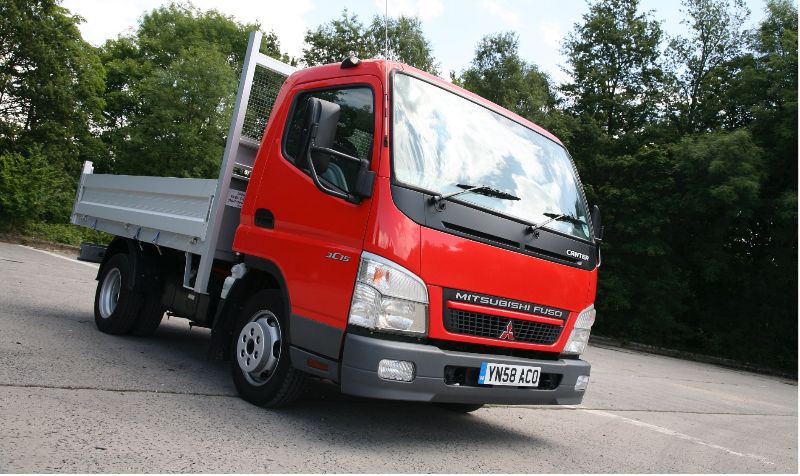 Like the countries it is sold in, the Canter range is broad and diverse, with GVWs starting at 3.5 tonnes and extending to the new 8.55 tonne model, up from 7.5 tonnes previously, that provides a maximum payload potential of more than six tonnes.

Care to take a guess at what is Daimler Trucks’ best-selling model? A BharatBenz perhaps, fuelling growth in the emerging markets; a big brash Class 8 truck from Western Star found all over North America; or maybe the smart money is on the Mercedes-Benz Actros. It is in fact the considerably smaller Fuso Canter that is a worldwide best-seller, having racked up 140,000 sales globally last year. Sales in Japan and the rest of Asia account for nearly two-thirds of all sales for Daimler Trucks Asia – Daimler’s largest division with 172,658 unit sales in 2013 – but Europe still account for 2.3% or around 4,000 units making the two main territories for the Canter of Germany and UK (with 26% and 22% share of Daimler Trucks Asia sales respectively) still fairly significant markets.

Like the countries it is sold in, the Canter range is broad and diverse, with GVWs starting at 3.5 tonnes and extending to the new 8.55 tonne model, up from 7.5 tonnes previously, that provides a maximum payload potential of more than six tonnes. It’s a broad range for a small truck, and just taking engine and wheelbase options into account there are nearly 100 variations of the Canter available.

Focusing on the 3.5-tonne model, Fuso offers a range of body types with tipper and dropside bodies available ex factory alongside chassis cabs, with wheelbases ranging from 3,200mm to 4,400mm. Two body widths are also available, 1,950mm and 2,200mm, however, in the UK only the wider Comfort cabs will be available.

Three engine options complete the range, with 129hp, 147hp and 173hp units delivering 300Nm, 370Nm and 430Nm respectively from the 3-litre, four-cylinder engine with variable geometry turbocharging. All Canter models are equipped with an exhaust brake, while the addition of the Ecoefficiency features to the powertrain are claimed to increase economy by up to 9% over the outgoing model.

On the road, our 129hp 3.5-tonne test vehicle coped admirably with the varied test route of urban and country roads. Despite the gear change action of the five-speed manual transmission feeling tight and unrefined, the rest of the Canter is surprisingly comfortable. The ride is impressive for a cab-over vehicle, and its seat and seating position despite being very upright, are comfortable enough. But it is the steering which is the Canter’s highest strength. Direct, firm and communicative, the Canter feels connected to the road whilst cornering, and provides ample feedback to the driver about the level grip on the surface below. Standard-issue disc brakes on all corners were good enough to quickly halt our partly laden test vehicle, and feel capable enough of bringing a fully ballasted Canter, with up to a 1,660kg body and payload allowance, to a standstill.

Improvements in the Canter’s efficiency are the obvious headline grabbing features of the new models, but across the range payload is key with higher GVW models like the new 8.55 tonne chassis benefiting enormously from the Canter’s low kerbweight. Factory built body variants are also a major plus for the new range, which is now also available with a Duonic dual clutch transmission on all GVW models.