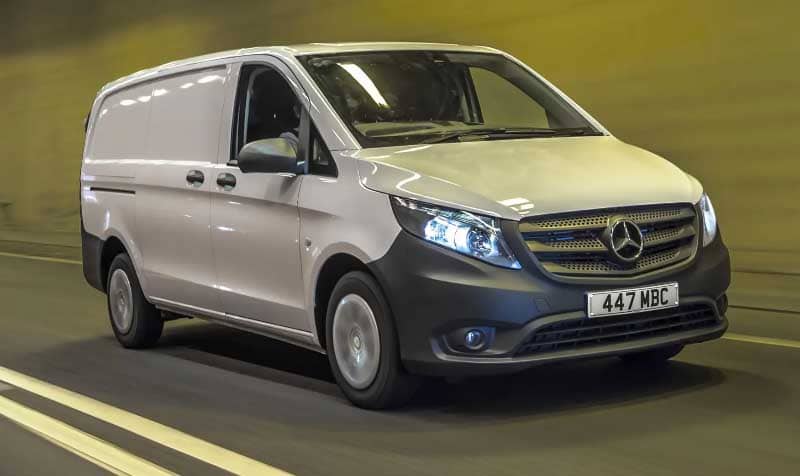 There is one simple reason why the Mercedes-Benz Vito doesn’t get the credit it is due here in the UK, and that is because the Vito is not a Sprinter.

The big Merc van is a hard act to follow and the Merc in the middle has to compete with cheaper rivals in a very competitive and price sensitive sector. The Vito has never been a bad van, in fact it is a very good van on the whole, with strong residual values, excellent driver comfort and enjoyable driving characteristics, but it does have a quirk or two. In a world of front-wheel drive vans, its driven rear wheels are perhaps the largest oddity, but that hasn’t held the Vito back. It has sold more than 1.2m variants since its launch, nevertheless the decision has been made with the new Vito to run with the masses and introduce a new model with front-wheel-drive.

Power has been borrowed from Renault, with a 1.6-litre engine found in the Trafic, and the net result is a cheaper model with a slightly improved payload. There’s even two power outputs to choose from, 88hp and 114hp respectively, in the 109 CDI and 111 CDI models.

Rear-wheel-drive hasn’t been abandoned either, and its Mercedes engines doing the grunt work with a Euro-6 complaint 2.15-litre four-cylinder unit offering outputs of 136hp in the 114, 163hp in the 116 and 190hp in the 119 – all of which carry BlueTec badging to show their Euro-6 status.

New front-wheel-drive Vitos are claimed to be 120kg lighter than comparable outgoing models, and 60kg lower in kerbweight than the new rear-wheel-drive models. That means payloads have increased across the range, however, some of that gain has been eaten into by a slight increase in body length for improved pedestrian protection. There are two wheelbase options and three body lengths of 4,895mm, 5,140mm and 5,370mm. Despite being 140mm longer, largely for the pedestrians, the Vito’s loadspace actually remains unchanged, with load volumes of between 5.5m3 and 6.6m3.

What's changed in the Mercedes Vito?

If you’ve got a keen eye, you will spot that the Vito looks different, but on the whole, changes to the Vito are small. The cabin has been redesigned to more closely reflect the look and feel of its other models. Like in the smaller Citan, the dash is high and vertical, it feels a little further away than in Mercedes’ smallest model – which is a good thing – but, sitting as a passenger, without the distraction of a steering wheel and the space carved out for pedals, the dash feels uncomfortably close. Drivers, however, will not really notice the affect, and instead will note that air vents and controls are closer. There is an abundance of storage above the dash, however, all of them are open or partially open compartments, which may cause some issues with reflections on the windscreen. They are also fairly deep, so items placed in the storage compartment directly ahead of the driver are often out of reach. Stowage in the doors is much more convenient, with a larger pocket at the base of each and a smaller section higher up – that is probably the van’s most useful storage point for keys, passes, mobiles or coins.

Despite minor drawbacks, the redesigned cab is far better for the driver than the outgoing model, but one inconvenience they might hit upon is the humped floor, as this and the intrusion of the gearshift lever into the gangway hinders cross-cab access. For your average driver it’s not a problem, but given that Mercedes is keen to pitch the Vito at an urban audience, exiting to the kerb safely should be a priority, and one that is not helped should you park with the flow of traffic and feel the need to leave via the passenger door.

As you would expect with a Mercedes, the new Vito is a premium product, and the build quality is extremely high. Noise levels have been noticeably lowered, and even with the more raucous 1.6-litre engine it is a quiet working environment.

With the new driveline option, the choice between front- and rear-wheel-drive will come down to three P’s for Vito buyers. Price, power and payload. The front-wheel-drive is 120kg lighter than comparable outgoing models, and 60kg lower in kerbweight than the new rear-wheel-drive models. For power there is a clear divide between the two engines, with the entry-level 109 CDI really only being suitable for very light loads and the top-end 119 Bluetec best suited for tearing away from mildly sporty hatchbacks at traffic lights.  When it comes to price, an entry level front-wheel-drive model, the 109 CDI Compact is £17,855, compared to the 114 BlueTec Compact at a £20,505 starting price.

Having previously driven the two most powerful rear-wheel-drive models and the more powerful 111 CDI front-wheel-drive variant while in Europe, on UK road we opted to take the two extremes of the scale with the entry level 109 CDI and the top of the range 119 BlueTec.

Previously our pick of the bunch was the 116 CDI, and having driven the Vito in the UK, that recommendation doesn’t change. While the 190hp range-topper is a formidable machine, it is arguably unnecessarily quick for all but the most demanding of jobs at full weight. Conversely, the 109 CDI is drastically underpowered. We’ve tried it in the Vauxhall and Renault vans and there too it is little more than a means of turning the wheels. During our test, and with 500kg onboard, the 109 CDI struggled to bring the Vito up to speed and inclines and overtakes were a real battle. Imagine its performance with a maximum payload of nearly 1.3 tonnes in a 3-tonne vehicle with 88hp, and just 230 Nm of torque between just 1,500–2,000 rpm. For anyone required to carry a bit of weight we’d look higher up the power range, but if you’re operating with a very low payload the entry-level engine may be sufficient.

It all starts with the steering wheel, its thick rim feels ideally matched to the weight and feel of the steering which is moderately heavy but sharp and direct. It’s the most engaging drive for a vehicle of this size and is paired with a suspension setup that is firm but well dampened and comfortably masks the bumps of our uniquely British roads. The weight feels more equally distributed in the rear-wheel-drive Vito, and with half tonne payload it feels balanced on the road at all four corners.

The front-wheel model demonstrates the same responsive handling and feels just as balanced as rear-wheel-drive model, despite the bulk of the running gear being concentrated at the front, but the torque and engine power just isn’t sufficient enough. Power delivery is, however, smooth and well paired with the six-speed transmission, but in comparison to the 2.5-litre units it is too raucous. Both 109 CDI and 119 CDI models buzzed along at a 70mph cruise at a fraction over 2,000rpm, but such is the noise in the lower powered unit, you’d think it was a higher.

How does the front-wheel-drive Vito compare with its rivals? The answer: Favourably. For now though, the new Vito is just as reliable and predictable a van as the outgoing model, the powertrain is every bit as comfortable and enjoyable, and even as front-wheel-drive it hasn’t hindered the driving appeal of the Vito. Has it caught up with its rivals? Yes. Has it set a new benchmark for the others to aspire to? Not quite. But there’s now more choice than ever, and the barrier of owning a Mercedes has dropped that little bit lower. The question now is do you want one…?