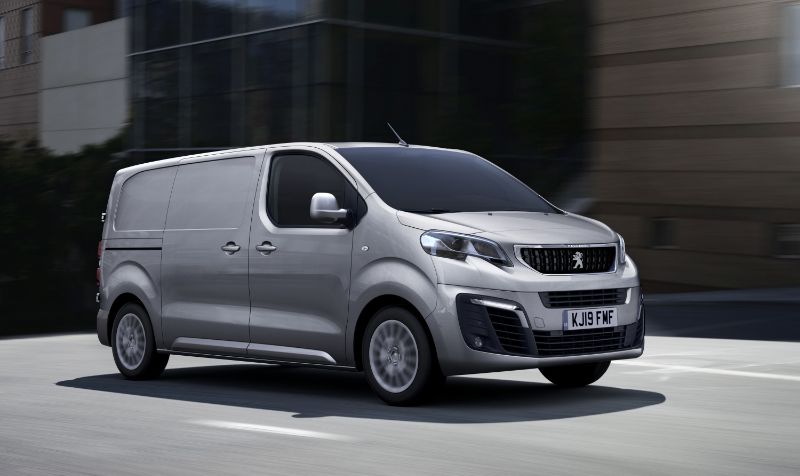 Sharing is common in the automotive world, and Peugeot are well versed in the art of badge-engineering. They’ve made joint venture cars with a range of partners, and their entire commercial vehicle range is shared with Citroen.

You might say they are experts at it, so it is no surprise that the new Peugeot Expert will also be a joint-venture vehicle shared with both Citroen and Toyota. Where this new mid-sized van will differ from models of old though, is that all three models, Citroen Dispatch, Toyota Proace and Peugeot Expert will all look different, with their own brand identity.

Shared parts include everything from the bonnet backwards, with only the front two panels and headlight clusters varying between each of the vans. It’s the same recipe used on the two previous generations of van, using a common platform – in this case, the new Efficient Modular Platform 2 (EMP2) used on passenger cars like the Peugeot 308 – that has been tailored to accommodate three different vehicle lengths, rather than the two found in the previous generation, with a new short wheelbase van added to the line-up.

How big is the Peugeot Expert?

This new Compact model measures 4,600mm and has a maximum storage area length of 2,160mm, while the Standard van measures up at 4,950mm with a 2,510mm load length. The largest Long van is 5,300mm front to rear and can transport a 2,860mm length. All three vans, however, can be fitted with a Moduwork folding front passenger seat and load-through bulkhead hatch to enable an additional 1,160mm of usable space for pipework or lengths of wood. As well as panel van versions, Peugeot is offering the Expert as a combi minibus with three rows of seats and space for nine passengers, a six seat crew van in Standard or Long bodies, and a platform cab for specialist conversions.

The width between the wheel arches is 1,260mm, enabling all three models to take at least two pallets on the floor, while overall capacity means load volumes are 5.1m3, 5.8m3 and 6.6m3 for Compact, Standard and Long respectively. Vehicle height is 1,900mm for the Compact and Standard vans, this is to ensure they can fit under most car parking height restrictions within European cities, while the Long model is 40mm taller at 1,940mm.

Depending on the model the new Expert is up to 150kgs lighter than it’s predecessor, but Peugeot is more pleased with the van’s kerbweight compared to the opposition, giving them a best in class payload of 1,500kg for a 3.1-tonne van.

What engine does the Peugeot Expert have?

New engines also form a big part of the update to the Expert with a range of BlueHDI units that meet Euro-6 emissions standards. Power begins with a 1.6-litre 95bhp entry-model available as standard with a five-speed manual gearbox but with the option of a robotised auto. There’s also a higher-powered 115bhp version that will likely be the big seller and is available only as a manual.

A larger capacity 2-litre engine also features in the range with three power ratings of 120hp, 150hp, and 180hp providing maximum torque outputs from 210Nm to 370Nm, the most powerful of which gets an automatic gearbox and steering wheel mounted paddles for changing gear.

Fuel economy has improved significantly in the new range, and the most fuel efficient engine is the 114bhp 1.6-litre returning a claimed 55.3mpg on the combined cycle and CO2 emissions of just 133g/km. The entry-level 94bhp engine with manual transmission returns 51.3mpg, while the range-topping 178bhp engine is good for 46.3mpg.

The BlueHDI engine badging refers to the inclusion of AdBlue in the new exhaust gas after treatment system that uses Selective Catalytic Reduction (SCR) to remove particulates from the tailpipe emissions. The Expert has a 22-litre AdBlue tank that should be enough for around 9,000 miles.

The restyled front is an obvious change, and one that we’re not overly keen on – it follows the family lineage set out by the Peugeot 2008 car, but it is in the cabin where you will invariably notice the biggest changes to the new Expert – not least because the dash has been totally redesigned.

Three trim levels are available, S, Professional and Professional Plus with the latter two now featuring a 7-inch touchscreen at their heart. The display forms the main interface for the infotainment and navigation systems and is supplemented by steering wheel controls, but it is the new head-up display (a £300 option) that is amongst the more unusual items to be found in a commercial vehicle.

Entry-level S models are understandably basic, with DAB radio, Bluetooth and cruise control the only real stand out features, but Professional and Professional Plus help set the Expert  in the higher end of the segment with phone and tablet mirroring, parking sensors and electric heated mirrors on the Professional models, and automatic headlights and wipers, rear parking camera and front sensors, LED daytime running lights and body coloured bumpers and mirrors added on to Professional Plus vans. Storage is fairly generous for a mid-sized van with two gloveboxes and a large A4-sized open compartment on top of the dashboard. Door bins are large enough to hold water bottles, while there are two cup holders located centrally. Concealed storage can also be found beneath the passenger bench seat.

The van’s ultimate party trick, however, is the head-up display that rises gracefully from the dashboard cowling in front of the steering wheel when the ignition is turned on. The small piece of plastic looks slightly out of place sticking up as it does, but a wealth of useful information appears on the display with crisp detailing. Whether it is bright sunshine or driving rain, the display is instantly readable and your speed is prominently displayed. It also prevents you from having to look away from the road when following directions. From a duty of care point-of-view it should really be a no-brainer for fleets, but from a comfort aspect it certainly helps reduce the strain of city driving when following sat-nav directions.

Cosmetically and practically, the new Peugeot Expert has then benefitted enormously from the refresh, but it has also improved immensely in the way it drives. The new 2-litre engine with 180hp and 370Nm of torque feels comfortable both pootling around built up areas and at cruising speed on a highway. Engine noise is also considerably lower than in the previous model. But it is the 1.6-litre with 115hp that we would opt for as our engine of choice. Not only does it return the best fuel economy, its power delivery is smooth and refined with no noticeable flat spots. A fully laden van at 1,500kg may prove to be its undoing, but with a 300kg ballast the 1.6 Blue HDI 115 Expert was brisk and comfortable.

Handling in the new van has improved too, and the overall feel you get from the road is far greater. The old model was quite bouncy at main road speeds and the steering felt far too vague, but now the Expert has a firm grip on the road and the connection to the wheels feels a lot more certain. The Expert can thank its passenger car underpinnings for this, which make for a composed and comfortable ride, decent seating position affording a good view ahead and ample forward and backward seat travel with good support for your thighs and lower back.

From being one of the worst vans of any type or size on the market, the Expert is now a pleasant, relaxing and comfortable van to drive. The improvement is like the difference between day and night, and Peugeot are not misguided in their hopes of challenging the German brands at the more premium end of the sector. Badge snobbery and prejudices will inevitably hold them back – especially with a starting price of £18,000 – but the Expert is now an impressive van to be in rather than a cheap van, and one that is finally fit to compete against all medium vans in the market.