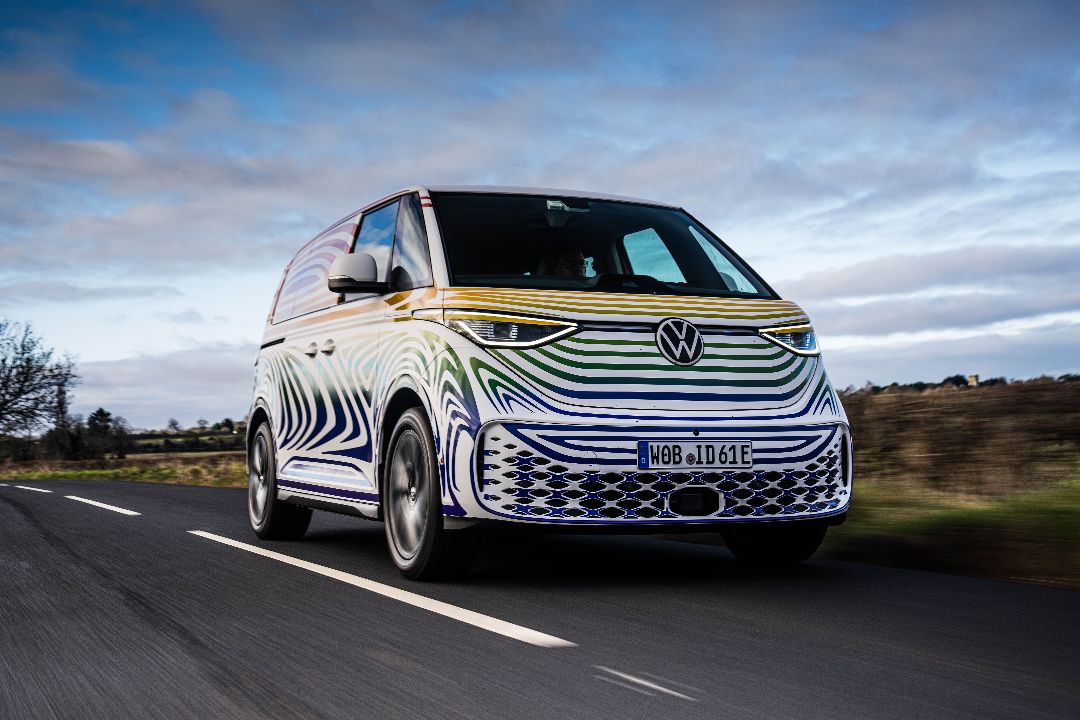 The Volkswagen ID Buzz Cargo is a brand new electric van that takes its inspiration from the classic Volkswagen campervan.

Volkswagen hasn’t given us an electric commercial vehicle yet – well, not a proper one – but that’s all about to change with the ID. Buzz Cargo.

Think of it as a modern interpretation of the Type 2 van synonymous with campervans. It's a halfway house between the Caddy and the Transporter but with an electric powertrain. Look past the swirling rainbow camouflage and you will see VW’s new halo product for an electric generation. ID Buzz will have passenger, campervan, and commercial vehicle versions of this compact but medium-sized van all scheduled to go into production.

If you’re familiar with the passenger car range, think of this as a boxier Volkswagen ID.4 as it is based on the group’s MEB electric vehicle platform – which is exactly where you need to look to determine where this model will be heading [See box].

Launching with a 150kW motor, driven through the rear wheels, the ID. Buzz Cargo has a 77kWh battery pack that should make it capable of reaching up to 250 miles on a single charge. Pretty impressive stuff for a van that is not only fast but surprisingly adept in the payload department.

Early versions will have a 2.4-tonne GVW with a payload of around 580kg. That’s perhaps not mind-blowing for the majority of trendy tradesmen who might be tempted by such a nostalgic looking van. But it is not far off a Renault Kangoo ZE’s payload. It is way down on the Citroen e-Berlingo, Peugeot e-Partner or Vauxhall Combo-e vans though – all of which are marginally smaller but with larger gross weights.

In other words, there’s room for improvement from a commercial vehicle point of view, but given time, that will come. In the meantime, however, the ID. Buzz Cargo has a 4m3 capacity with a1.25m of internal height, 1.7m across the width and a 2.2m in length. There’s also the ability for a small load though bulkhead adding an additional 450mm. It’s possible to transport two Euro pallets in the load area. There's also six lashing points, and the option of aeroplane-style load securing rails as well. In other words, it is most definitely trying to be a proper commercial vehicle.

How big is the ID Buzz Cargo?

Its size sees it fit neatly between its siblings, with it being roughly 200mm shorter than the Transporter T6.1 and 200mm longer than the Caddy, but there is a lot more to the ID. Buzz Cargo than filling a gap in the product range. That's because as a vehicle conceived as being electric-only it makes fewer compromises than VW’s other electric vans to-date. We're looking at you e-Crafter and ABT e-Transporter.

The battery pack, for example is integrated within the chassis which makes the ID. Buzz feel low to the ground and particularly planted. That’s a good thing. And even though it’s rear-wheel-drive layout means that the load area is slightly higher than that of a Caddy van, its not so much that it would pose a problem for loading items into or out of it.

What is the ID Buzz Cargo like to drive?

When it comes to driving though, the ID. Buzz is far superior to any of the current VW crop of vans, which is a considerably achievement. It sits on a near 3m wheelbase, but its exceptionally short overhangs makes it feel like half the size. It rides smooth, handles brilliantly and has a turning circle of just 11m – ideal for the city.

Hardly surprising though, is that you’d expect anything with a VW badge to be class leading. The ID. Buzz will follow, especially as Caddy is a Golf, and Transporter T6.1 has been one of the best mid-sized vans. The Crafter is also still the most complete of any of the large vans on the market. What the ID. Buzz brings to the table is that same VW dynamic – great to drive, nice to look at, reassuringly expensive but reliable to own. The ID. Buzz Cargo will probably have a price tag close to £43,000 when it goes on sale) but with a wealth of new technology on top.

Unfortunately, the interior of the early protype test vehicle we drove was covered up. This was ahead of its official reveal in March, but the central infotainment display and the steering wheel cluster were visible giving a glimpse of the technology onboard.

The headline grabber is that there’s a 12-inch central display for the ID. Buzz but Cargo models will have a slightly smaller 10-inch version as standard with the 12in as an option. It allows you to control the various driving modes of the van, which include an Eco mode, Comfort setting and a Sport option. The noticeable difference between each is the responsiveness and output of the throttle pedal. The subtle weighting of the steering is also changed. The steering wheel clusters gets a smaller 6-inch display. This feeds back nearly all of the required information to right in front of you.

What isn’t immediately apparent is the work the ID. Buzz will be doing behind the scenes with its Travel Assist system using VW’s new and evolving swarm data capture. It will use other VW Group vehicle’s speed and GPS data to allow the system to learn about lane positioning. As well as other vehicle driving habits on the roads you drive. For example, if you need to avoid driving in the centre of the lane because there are tram tracks. The system will then offset its automatic lane centring to avoid them. Clever stuff.

Perhaps the most appealing and intriguing idea is that you can teach it to perform parking manoeuvres using the Park Assist function. Say, for example, you have a tricky driveway entry to do each night. Maybe there’s a pillar or wall you need to carefully negotiate, the ID. Buzz will learn the process and replicate it.

Far from being just another electric van, VW has adopted a whole new platform on which its future vehicles will be not only electrified but more connected and more intelligent as well. The ID. Buzz is a brilliant example of what an electric van can be when designed from a blank sheet.

What next for the ID. Buzz Cargo?

Most manufacturers have been cautiously rolling out their new electric vans with just a single body size, testing the water and limiting their risk in what is still a fairly niche sector.  While the ID. Buzz Cargo is arriving in October with just the one variant, it’s not likely to remain that way. For starters, an ID. California camper van variant is due after 2025, which will be based on a long wheel-base model. That will mean an increase in gross vehicle weight from 2.4-tonnes to 3-tonnes and will come with the option of an even larger battery pack.

But there will be more developments that aren’t yet official and it is the recently launched Volkswagen ID.4 which gives the best indication as to what the future product line-up for the ID. Buzz Cargo might include.

What is the ID Buzz Range?

While it’s 250 mile range will be celebrated my many, in reality that is far greater than many commercial vehicle customers will need. It also adds additional weight (sacrificing payload) and cost to the van. Expect a smaller battery option similar to the 52kWh pack currently offered on the ID.4 car. That will likely knock around 40% off the van’s overall range. But with support for rapid charging at 115kW a quick top-up of around 30 minutes will restore up to 80% capacity.

One final variant will likely be an all-wheel-drive model. As an SUV, there is a 4x4 version of the ID.4 but electric motors in the rear and the front of the ID. Buzz Cargo would allow Volkswagen to use the 4Motion badge once again.

You may not be able to get the ID. Buzz Cargo in quite the number of variants that you can currently choose from on a Transporter, but VW isn’t serving up a one-size fits all offering either.

Rumour has it that there will also be a self-driving ID Buzz model on the market sometime after 2025.

When did the ID Buzz story first begin?

The first pictures of the ID Buzz were revealed by Volkswagen’s CEO Herbert Diess. He posted a teaser sketch video of the new Volkswagen ID Buzz on Twitter. This gave everyone an idea of what the electric van will eventually look like.

The ID Buzz concept car was shown previously at the Detroit motor show in 2017 as a passenger version.

The main difference between the concept van’s design and the official VW images are found in the front bumper. The concept’s honeycomb design with round daytime running lights is replaced by a look similar to its current passenger cars. Especially the Volkswagen T7 Multivan.

On the inside, expect the Volkswagen ID Buzz Cargo to be pretty similar to the ID.4 car. Cargo vans will get slightly smaller screens and more practical compartments in the dash. Expect a digital driver’s display, a large central infotainment system and plenty of smart connected systems like the ID Light. These illuminate the dashboard in different colours depending on the car’s charging conditions, navigation directions. As well as when using the voice assistant.

And you should expect a campervan version too. An ID California is likely to hit the roads a few years into the production schedule.

Volkswagen has already confirmed that the new VW ID Buzz will come with a range of up to 342 miles. Power will come from a single motor in the rear and will be shared with the ID4 car which also has a all wheel drive model, so expect four wheel drive as an option later in the lifecycle too.

The official launch date for the ID Buzz was 9th March 2022. Order books will open in the spring and deliveries by the end of the year. Prices for the ID Buzz Cargo will likely start at around £45,000. That's roughly inline with the hybrid powertrain option for the Volkswagen T7 Multivan.

Price: £ to £
Fuel economy: to mpg
Power: hp to hp
Torque: Nm to Nm
Payload: kg to kg
Volume: to m3
Loadspace Max: to mm
Things We Like:
Fantastic to drive
Things We Like Less:
A bit too cute for a CV, maybe?
Ratings:
Overall: 9/10