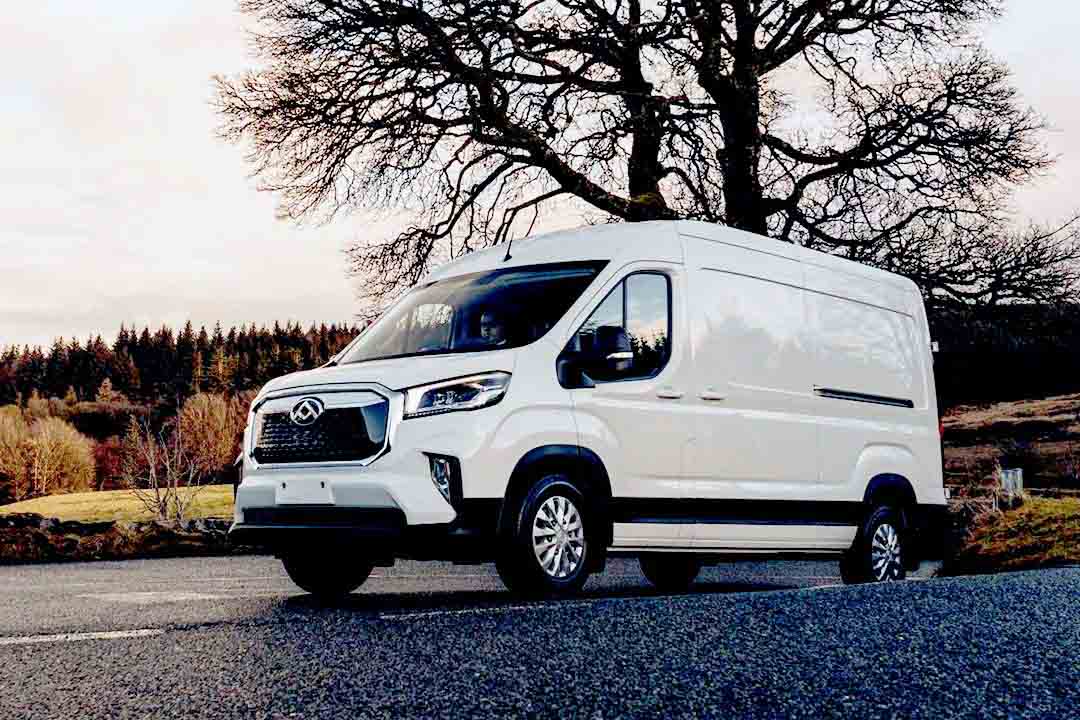 By the end of the decade most manfacturers will be making only electric vans, but Maxus is already heading in that direction with its large Maxus E Deliver 9 van.

They do make a diesel van, the Maxus Deliver 9 but they know the future is electric which is why they're adding an all-electric pick-up truck into the range too.

The Maxus E Deliver 9 is in a way a the successor to the EV80 - although most people will be more familiar with that as an LDV. That's because Maxus is no stranger to the electric large van market. They've been in it almost since they relaunched in the UK. The E Deliver 9 though is a brand new model that was built on a platform that was always destined to have electricity at its heart. And it's been securing high-profile fleet deals with household names in the courier and home delivery segment as a result.

Its success lies in the fact it was amongst the first large vans to market with a useable real-world range in excess of 200 miles and unlike its rivals also offers a range of bodies and batteries.

The competition, namely the Mercedes-Benz eSprinter and Renault Master ZE either offered only single variants or had an exceptionally low range, and while the Ford E-Transit has upset the apple cart with power, battery and body size options, the Maxus has established itself as a top contender in the electric van market.

Like its smaller sibling, the E Deliver 3, the E Deliver 9 offers the prospect of decent range with high levels of equipment in a modern van at a reasonable price.

Keep reading to find out if the E Deliver 9 is the right van for you, and find out how it driver, how much it can carry and all the features that come with it.

What's it like to drive the Maxus E Deliver 9?

It’s well known that large vans have posed the biggest problems for manufacturers when it comes to electrification. Early models like the Renault Master ZE and Mercedes eSprinter were underpowered with heavy batteries that failed to deliver much range, but Maxus were the first to crack the combination of a high powered motor and large battery pack. The E Deliver 9 gets a 150kW (201bhp) motor that develops 310Nm of peak torque. That’s considerably more power than the 161bhp diesel model and more than the 85kW eSprinter and the updated 57kW Renault Master E-Tech. It doesn’t, however, quite match the E-Transit 198kW output.

It's a similar story with the batteries where the E Deliver 9 matches and then beats the competition with its range of three batteries with 52kWh, 72kWh and 89kWh packs compared to the 68kWh found in the E-Transit and the 52kWh and 55kWh from the Master and eSprinter, respectively.

On paper the E Deliver 9 is a real contender and it’s a similar story behind the wheel. Where the diesel van is a bit course and noisy, the E Deliver 9 is not. Its electric motor is a bit noisy and there’s a great deal of road noise that penetrates into the cabin, but you can’t fault its performance or driving manners.

It handles well for a large van and is aided by the heavy batteries being beneath the chassis to make the van feel more planted than the diesel does when unladen.

The steering is a bit numb and you get some vibrations the wheel but it’s engaging to drive and comfortable to be in with a decent level of ride comfort. The ride is not as refined as an eSprinter and nowhere near as accomplished on any front when compared to the E-Transit but it’s more than a match for the electric Master and the progress and improvement compared to the Maxus EV80 it replaced is astonishing.

Before talking about the interior take a brief look at the exterior, because the E Deliver 9 gets a lot of criticism for perhaps having too much of a resemblance to some of its rivals. Unlike the smaller E Deliver 3 which definitely went in its own direction for the styling, the big van has some similarities to Transit, Sprinter and Crafter vans. Then again, most large vans have started to look like each other long before the Maxus came along. That same “copycat” vibe though has been transferred to the interior which is no bad thing.

A 10-inch touchscreen dominates the dash, as they do in most modern vans, and there’s plenty of piano black plastic and chrome effect trim on display. The material quality isn’t brilliant, and you’ll hear a fair few squeaks but like the diesel Deliver 9, this is a van that does equipment by the bucket load with electric heated mirrors, cruise control, air conditioning, an 8-way adjustable driver’s seat, automatic headlights, tyre pressure monitoring, front and rear parking sensors, and reversing camera, all as standard. That reads more like the trim for the top spec of most diesel vans, but with just one trim level, Maxus really has thrown the lot at the E Deliver 9.

The large 10in touchscreen has Apple CarPlay and Android Auto integration, and while the in-built system it is a bit sluggish the smartphone mirroring works flawlessly, and most things can be controlled via the steering wheel mounted controls.

The lane departure warning system button can be found on the bank of controls for the heating, and which are your standard rotary-type dials.

The seat, which has an arm rest, is very comfortable despite being firm and the level of adjustment enables anyone to fine tune a good seating position with plenty of seat travel for those with long legs. It’s a spacious and pleasant cabin to be in.

Electric vans are no longer payload limited in the way they once were, and in fact due to derogation that allows a car licence holder to drive a van that’s 4.25 tonnes rather than the standard 3.5 tonnes on their regular car licence, many electric vehicles are now matching or bettering their diesel equivalent for payload.

The E Deliver 9, however, is not available at a higher gross vehicle weight – unlike the E-Transit – but still manages an impressive 1200kg maximum payload on the vans with the smallest 52kWh battery. Jumping up to the 72kWh battery results in a 180kg payload penalty and the bigger 89kWh battery will require another 120kgs leaving you with just 860kg.

There are two wheelbase lengths of 3366mm and 3760mm and the largest battery is only available on the longer version with total vehicle length ranging from 5546mm to 5940mm. That gives you a total usable loadspace length of 3019mm and 3413mm. There is just one roof height, 2525mm, with an internal loadspace of 1792mm.

Load volumes range from 9.7m3 to 11m3. All vans get a single sliding side door and have bright LED lighting. There's eight tie down points and a non-slip protective floor covering too.

Space in the cabin for personal or work items isn’t quite as generous. There’s a small compartment to the right of the steering wheel and cupholders at the ends of the dash. But the door pockets can only just about fit in a large bottle and are narrow. An overhead shelf does make matters a little better.

The Deliver 9 diesel van has a real trick up its sleeve in that it is cheaper than the competition. Sadly, the same cannot be said for the E Deliver 9. While Maxus do offer incentives, the list price puts their electric van on a par with the eSprinter. That means it is way ahead of the E-Transit which undercuts it by close to £10,000.

Of course, electric vehicles aren’t just about upfront costs and there are huge savings to be made on the operational side, but that will depend how you use it and charge the van. Charge times are good with the ability to take a rapid DC charge in just 35 minutes for the small battery and 45 minutes for the largest pack. Battery range for the 52kWh, 72kWh and 89kWh are 147 miles, 179 miles and 219 miles respectively according to the WLTP City cycle.

As well as having an high level of equipment for the driver, there’s also a lot of standard safety equipment on the E Deliver 9.

The unofficial Maxus maxim of value above the competition still applies to the E Deliver 9 as it is crammed full of great features, but its base price does make it expensive. It’s not as refined as an E-Transit but it does have choice both with batteries and bodies on its side. It’s definitely worth considering if you’re in the market for a large electric van.