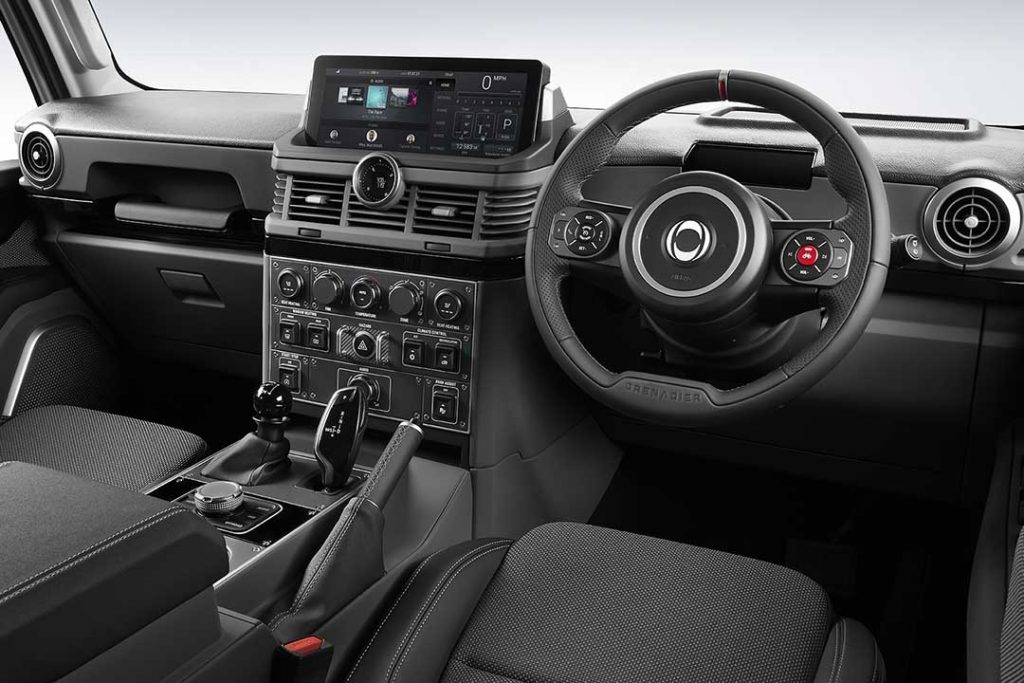 Understandably for what is being billed at the natural successor to the down-to-earth Land Rover Defender which ceased production in 2016, the INEOS Grenadier has an interior which focuses on being practical.

According to INEOS it is made from "hard-wearing materials" and has wipe-down upholstery. There's also removable rubber flooring as well as drain plugs in the footwells and cargo area so that it can be hosed down. The Recaro seats are water-resistant and stain-proof too.

Arguably its biggest and best feature is an off-road navigation system for tracking your routes. The Pathfinder system lets you record and share your routes as well as follow other waypoints by builidng a route online using GPS co-ordinates.

If you want to be boring and use the Grenadier on conventional roads then Apple CarPlay and Android Auto are integrated into the infotainment system with its 12.3-inch touchscreen.

Another unsual feature is the inclusion of a second horn.

Perhaps inspired by their sponsorship of the INEOS Grenadiers Pro Cycling team, the second horn is designed to be quieter and more subtle for cyclists and pedestrians.

Storage comes in the the shape of several compartments with a dry storage box under the rear seat, lockable central console space and side-mounted storage in the cargo area.

Details on some of the options have also been given, with the INEOS Grenader set to be available with carpet and leather seat options along with removable glass roof panels giving a hard-top cabriolet sort of vibe.

Order books for the INEOS Grenadier will open in October 2021 with a queuing system already in place via their website.