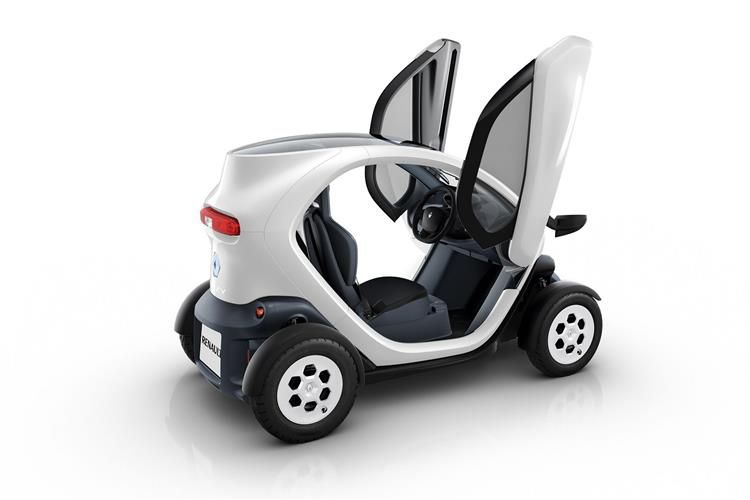 Within just a few minutes of driving Renault’ latest electric van – yes, it is technically a van – children were pointing and smiling, teenagers laughing and jeering and grown adults running across four lanes of traffic to ask questions about this alien-looking transportation.

The Twizy has actually been around for nearly two years now as a passenger car, while the concept dates back to the Frankfurt motor show in 2009, yet they are still relatively unknown. Even in central London where the infamous G-Wiz and other quadricycles (the same family to which the Twizy also belongs) are fairly common, the distinctive Renault 1+1 car is hardly seen. Rarer still is this Renault Twizy Cargo version having only been announced late last year, and catering for a very specific crowd.

With a 75kg maximum payload, it takes the meaning of light goods vehicle and stretches it, but the loadspace (or boot, as most will inevitably refer to it as) can actually accommodate quite a lot. The 180-litre storage area is big enough for a medium sized box, a couple of large backpacks or a very decadent bunch of flowers. It’s not a lot, and it less than a sixth of the vehicle’s own 474kg kerbweight – even the smallest vans can transport around one third of their mass – but given that there are 100kg of lithium-ion batteries buried under the floor it’s not difficult to see where the carrying capacity has gone to.

Power comes from a 13kW motor producing a heady 17hp and delivering 57Nm of torque instantly from the moment the pedal is depressed. With a top speed of 50mph, the Twizy isn’t quite up to trips on the motorway, but with a 0-28mph time of 6.1 seconds most vehicles will be left trailing in its wake as it surges forward while they implement a gear change. Range is of course a key issue with electric cars, and after fielding questions about its top speed, was always the next query we had to field. A claimed 62 miles was universally met with nods of approval, as too was the 3.5hour charge time from flat to full using a standard 3-pin plug and 10A electricity supply.

In order to drive the Twizy you must first get to grips with a few things. Entry for example can be through either door – a concept we noted that everyone struggled with, walking around the vehicle to the right-hand side on 9/10 occasions. Silent motoring also proved challenging; not from the lack of engine noise, but because the Twizy is minimalist in the extreme and possess no radio, or even heating. Instead, the buzz of traffic keeps the driver entertained, and their senses occupied as at first you feel incredibly vulnerable to other road users. Our test vehicle was fitted with doors – surely a standard item I hear you say – which came at a cost of £545 for the supercar-like scissor opening action, but certainly a price well worth paying.

That initial fear is soon replaced with a grin from ear to ear as the electric motor whine, scrub of the tyres and rushing of the wind converge in your first burst of acceleration. Initially slightly slow to respond when you first plant your foot, the Twizy soon builds in speed, before decelerating progressively and with none of the harshness we have come to expect from regenerative braking in larger vehicles. Despite the skinny  125/80 R13 front tyres and 145/80 rear tyres, the Twizy holds the road admirably, the battery positioning no doubt helping in a low centre of gravity and even weight distribution. Ride comfort is an issue, its incredibly firm, something that as a driver you can get over as you can spot the bumps coming and brace accordingly, but were we to test a two seat version any passengers would certainly complain about the forgiving ride and relatively uncushioned seating.

It’s hard to come to a definite conclusion on the Twizy; as a vehicle it’s everything you want to see in modern design and engineering – namely innovative and challenging – but from a practical point of view, owning and running the Twizy as anything more than a hobby vehicle seems unrealistic. A business will need to use it all-year-round, and even on a bright summers day we found the exposed cabin a little breezy, while mopping up puddles of water on the driver’s seat when the elements turned proved a little tiresome.

We’d love to buy the Twizy as a summer runabout to the shops and suggest you should too – if you can afford its £7,795 purchase price and minimum £30 per month battery hire costs – but for an all-year all-rounder buy something with some doors.

There’s probably a very good reason why the Twizy doesn’t have a solar panel on the roof, and I’m sure it has everything to do with the cost, weight and complexity of implementing such a design, but we can’t help but think that it would be a very useful addition to the model – in black, it already looks like it could be, but sadly isn’t. Nevertheless, owners can specify the roof as a clear panel, giving you that panoramic feeling and making you even more conspicuous to helicopters and low flying aircraft as you are to fellow road users and easily amused passengers on the back of the bus. Our second wish on the Twizy 2.0 would be the addition of LED lights. The round headlights certainly give the Twizy a certain cuteness, but some ultra-modern LEDs would not only add to the futuristic feel of the Twizy but consume less power than the standard bulbs.

Renault Twizy Cargo ownership starts at a very reasonable £7,795 on the road, however, that doesn’t include battery rental. A full charge from a domestic plug socket will cost in the region of £1, but running costs are significantly higher due to the monthly leasing charge.

You’ll often hear the phrase “range anxiety” when people make reference to electric vehicles. It’s the crippling, all-consuming fear that you’ll be left stranded in the middle of the busy high street unable to go anywhere because, just like your expensive smartphone, the battery has died on you. Fortunately, it’s pretty easy to charge electric vehicles and the network is growing rapidly, however, we did come a bit unstuck whilst chasing kilowatts. The majority of charging points in and around London are funded by Transport for London and their Source London charging network. It’s a membership scheme that costs £10 per year and provides you with an RFID card to access the points many of which have gates or flaps that when closed lock themselves into position. With our mileage range down to single digits, finding a charging point was becoming necessary, and after locating the nearest one by cross referencing the Source London website and the Chargemaster Polar Instant mobile app, settled upon a Source point in South London.

The charging process is simple; present a card to the charging point, the gate unlocks and you can plug your charging cable into the point and close the gate to begin charging. But, closing the gate on this point was harder than usual, but after firmly holding the flap shut the locking mechanism held and charging began – this, it would turn out was to be our critical error.

The Twizy’s plug is of a particularly chunky design, and our chosen Pod Point pillar was – it transpired – an older unit and only designed to deal with standard 3-pin plugs, the result being that when we returned to unplug and drive away, the pillar’s locking gate was firmly stuck. The helpline’s remote unlocking wouldn’t work; it would require an engineer to attend from somewhere in Surrey.

After he disassembled the point the Renault Twizy Cargo was eventually free, but the reason for our unexpected detention was still not clear. Fortunately, this official response from Renault helped clarify things: “The plug on Twizy has been designed to be very robust and, therefore, is quite large.  On some older public charging points, we are aware that, if you force the flap shut, the size of the plug can cause the flap to jam.  It’s very unfortunate that you’ve had this experience, but I would say that it’s not representative of a typical Twizy owner who either charges at home or at work with a standard 3-pin socket.” So, if you do find yourself low on power and unable to plug in properly, we implore you not to force it, as from our experience the recovery truck will almost certainly arrive a lot sooner than the electrical engineer.