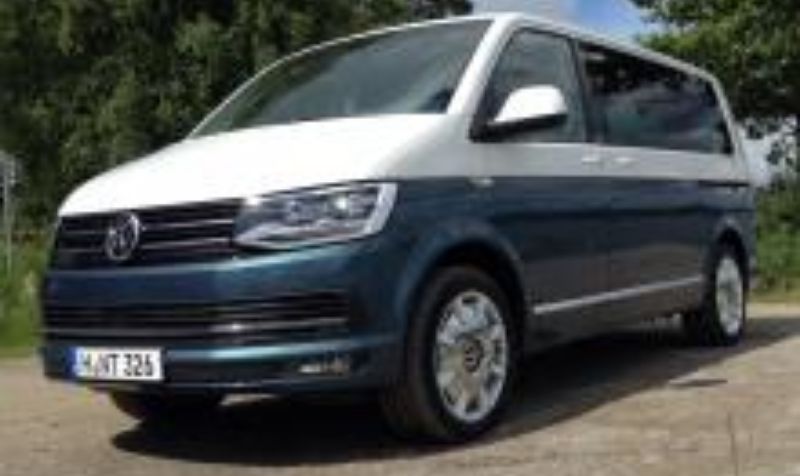 In Germany, you will hear the word Transporter a lot. It's the German word for van, but the transporter they all care about is the Volkswagen Transporter. That makes this new generation, the sixth in the history of VW, incredibly important as it's the van that defines all vans.

If you have a keen eye for detail you’ll notice there are a few changes to the outside appearance of the new Transporter, but they are fairly subtle and like us you’d struggle to communicate the changes. Instead, it’s best to study the two pictures below – think of it like a dull game of spot the difference – and notice the new headlights, slightly adjusted front bumper and grille, and barely perceptible alterations to the van’s waistline.

Where the changes have really taken place, however, are under the bonnet. There will be a whole host of new Euro-6 complaint engines in the new VW Transporter, but we won’t be getting the majority of them until 2016. For now, it’s a range of Euro-5 power units, with 84hp, 100hp, 138hp and 178hp, supplemented by a single Euro-6 offering, with a 100hp version of the same 2-litre TDI engine.

The big news, however, is that there will now be two petrol engine options, with gutsy 148hp and 201hp versions. While that may not be of much interest to van fleet buyers, the news will most likely be of interest to the private buyer and camper vans sectors who will no doubt also be intrigued by the two-tone paint job of the cover picture to this article – more on which later. As well as the new T6 model being available in a range of body options, there will be three roof heights from 1.4m to 2m and GWV ranging from 2.6 tonnes to 3.2 tonnes.

Bluemotion technology is now standard on all Transporter models, reducing fuel consumption thanks to low rolling resistance tyres, regenerative braking and a stop/start system. Six-speed manual transmissions are standard, but Volkswagen’s automatic DSG, a seven-speed gearbox with super smooth shifts, can be specified on all but the lowest powered vans.

Three trim levels will be available from launch with Startline, Trendline and Highline adding progressively more equipment at a cost of roughly £2,000 and £1,500 with each upgrade.

Entry-level models of the Transporter Startline will include DAB+ digital radio, Bluetooth and USB connections, a 5-inch touchscreen and VW’s new Automatic Post Collision Braking system. Bluetooth and digital radios are standard equipment along with the Bluemotion fuel saving technology.

The £17,745 starting price for the new VW Transporter places it at £100 less than a largely similar Mercedes-Benz Vito and £550 less than the entry-level Ford Transit Custom, although that does have a more powerful 98hp engine. Specification for each is largely similar, with Bluetooth and digital radios both standard equipment, however, Volkswagen is the only manufacturer of the three to provide specific fuel saving technology to all models.

The Transporter range is not just about vans, and perhaps its best known model is the California campervan that will be added to the range in early 2016. In addition to the camper, there are also kombi versions with extra seats and decent payloads, as well as passenger carrying Caravelle models, both of which will be available at launch.

What of that funky two-tone model in the pictures then? Well, Volkswagen is also launching a new Generation Six specification vehicle in a nod to its love bus past. Following overwhelming support form UK dealers, T6 Transporter Caravelles will be available in a choice of three two-tone colours, red-white, green-white, and blue-white. Each gets a colour coded dashboard and the top Highline trim specification. This, Volkwasgen says, is their chance to show the heritage of the Transporter in the new range, and to our eyes they’ve made a pretty decent job of it.

With the chassis left largely unchanged – it has merely been rebalanced to maintain the ride composure - have those new engines made a difference to the way the Transporter drives? Firstly you’ll notice the noise, or lack thereof. The T6 is a much quieter place to be as there is less engine noise and less road noise. Vibrations have also been reduced, something VW says will contribute to greater driver and passenger enjoyment on longer journeys.

Test vehicles were available with both 50% maximum payload as well as being unladen, making for an interesting comparison. At half weight, the Transporter was a smooth and enjoyable drive, feeling settled and balanced on the road.

But the T6’s biggest surprise was its unladen ride, which was almost as composed as the vehicles with payload. It’s hard to tell when in left-hand-drive and on foreign roads, but early indications show that the new Transporter may be a rival in the driving stakes, for both enjoyment and comfort, to match Merecedes’ Vito and the Ford Transit Custom.

The Transporter hasn’t really shown its age, despite the interior being largely unchanged through the T5’s life. This has prompted VW to only tinker with the finer details of the cabin. There’s some more storage space – most of which is open – but the finish and material quality has improved further still on the already well-built T5. While we weren’t overly enamored with the look and feel of the cloth in the entry-level models, the rest of the cabin is as well put together as anything in the sector.

There’s also some clever technology in the new Transporter that hasn’t been seen in the van world before. While other manufacturers are giving us ways to secure our tablets to the van, with some very clever storage and bracket solutions, VW has gone a whole step further and now enables mirroring of mobile and tablet devices straight to the dash console. While we weren’t able to play with the feature extensively, it allows several of the less distracting features of a tablet to be beamed right to the display unit. Compatibility appears to be a bit of an issue at the moment, but this is a development the LCV world could well embrace as delivery jobs, essential comms and routing could potentially all be put right in front of the driver.

Like the new Volkswagen Caddy that came earlier in the year, VW has made great steps in subtly revamping the Transporter. Styling wise they’ve been very conservative, but who can blame them, in 13 years of T5 production they sold more than 2 million vehicles. Where they’ve made it count is in the technology they’ve put into the engines, fuel efficiency and safety. We expect the Transporter T6 to be in high demand when deliveries begin in September.