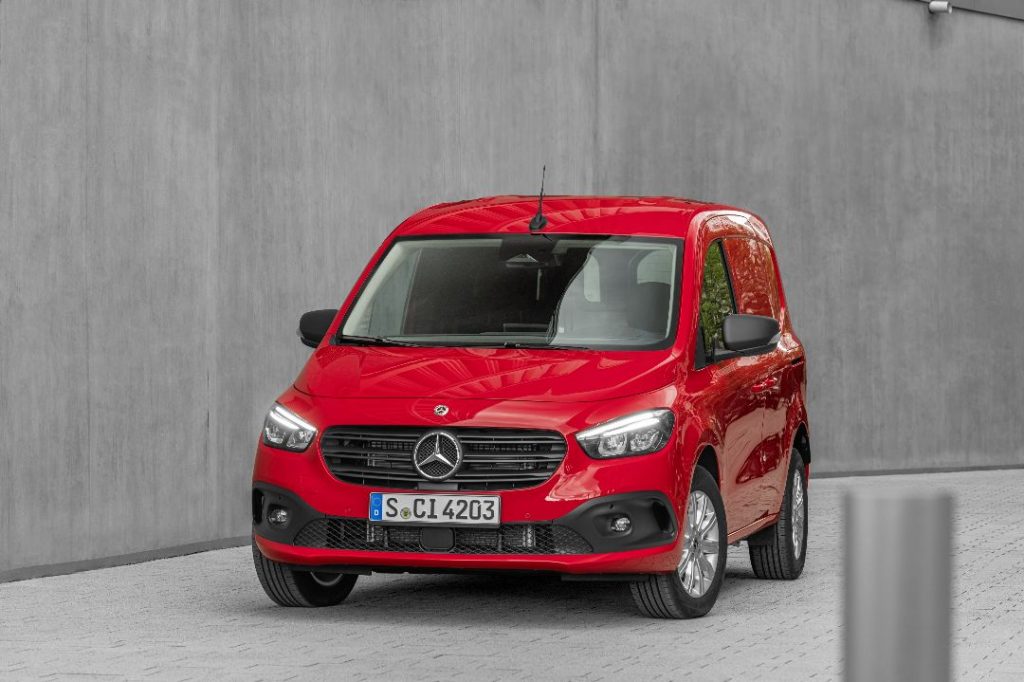 The new Citan will continue to be based on the Renault Kangoo but Mercedes has gone further in adapting the new van to its own customer’s needs and expectations. Visually it is similar the larger Vito and Sprinter vans. There's a three-bar grill and it differentiates itself from the Kangoo with altered headlights that include LED daytime running lights, revised front bumper and new rear light cluster.

The interior consists of a number of parts taken from both the Mercedes van range and its passenger cars, while the suspension and stabilisers have been tuned to give “brand-typical driving characteristics”.

What engine does the Citan have?

Power comes from a choice of three 1.5-litre diesel engines or two petrol options with the same power outputs as in the Kangoo with up to 116hp for the diesel range and 131hp for petrol powered vans. A six-speed manual transmission will be standard, but there’s also the option of a seven-speed dual-clutch auto. All models are front-wheel drive, and an eCitan all-electric van will also be available in the UK when the model goes on sale next year with a 44kWh batter and claimed range of 177 miles.

Safety systems have been enhanced in the new Citan which now uses a combination of radar, cameras and ultrasonic sensors. Standard safety features include hill start assistance, Attention Assist and Crosswind Assist as well as six airbags. There’s also Active Lane Keeping Assist, Blind Spot Assist and Speed Limit Assist with traffic sign detection all of which will be standard features on the Tourer passenger car version of the European specification model with full UK spec still to be decided.

Adaptive cruise control (also known as Active Distance Assist DISTRONIC which can automatically take over driving in traffic jams) will also be added to the options list and may feature on high-end UK spec models along with other driving assistance features.

Has the Mercedes Citan interior changed?

Inside, the Citan gets a new interior which is largely unique and of Mercedes’ own design. Shared Kangoo compenents are limited to the heater controls,. The rest of the dash adopts typical Mercedes vents, buttons and switches. Mercedes say they tried to make 80-90% of the items a driver interacts with most their own and have achieved this by using shared passenger car and commercial vehicle components.

The instrument cluster is a carry-over from the Sprinter van, and like its larger sibling the Citan will also be equipped with MBUX (Mercedes-Benz User Experience) infotainment system as an option. A central 5-inch touchscreen will allow Apple CarPlay and Android Auto integration along with Bluetooth and DAB radio. Keyless entry and keyless start are both available on the new van. As well as the interior design and layout, the seat fabrics are also unique to the Citan, with base level vans getting a pinstripe fabric and higher spec vans as well as the Tourer passenger car getting a honeycomb fabric.

The loadspace is larger than the outgoing model thanks to an overall increase in the vehicle’s dimensions. Standard body size details have only have been given at the moment. A long-wheelbase version will also become available, though. Regular vans will have a loadspace volume of 2.9m3 with a folding bulkhead option also allowing lengths of up to 3.05m to be carried. Twin sliding side doors will be available and asymmetric rear doors are fitted as standard with a wider left-hand-side door to improve access to the load area.

The Citan will be available at a number of different gross vehicle weights from 1.95-tonnes to 2.25-tonnes enabling a maximum payload of up to 782kg. The Citan will have a maximum towing capacity of 1.5-tonnes.

In other news, this new Citan will be Mercedes' last new diesel van according to head of Mercedes-Benz Vans, Marcus Breitschwerdt.

‘The Citan is the last new vehicle project for commercial customers at Mercedes-Benz Vans to use a combustion engine. All future new developments will exclusively be available with an electric drive,’ Breitschwerdt said in a statement.

While that doesn't mean an end to the diesel range of vans just yet, it will mean that the current evolution of both the Sprinter and Vito will be limited to just facelifts and technology upgrades.