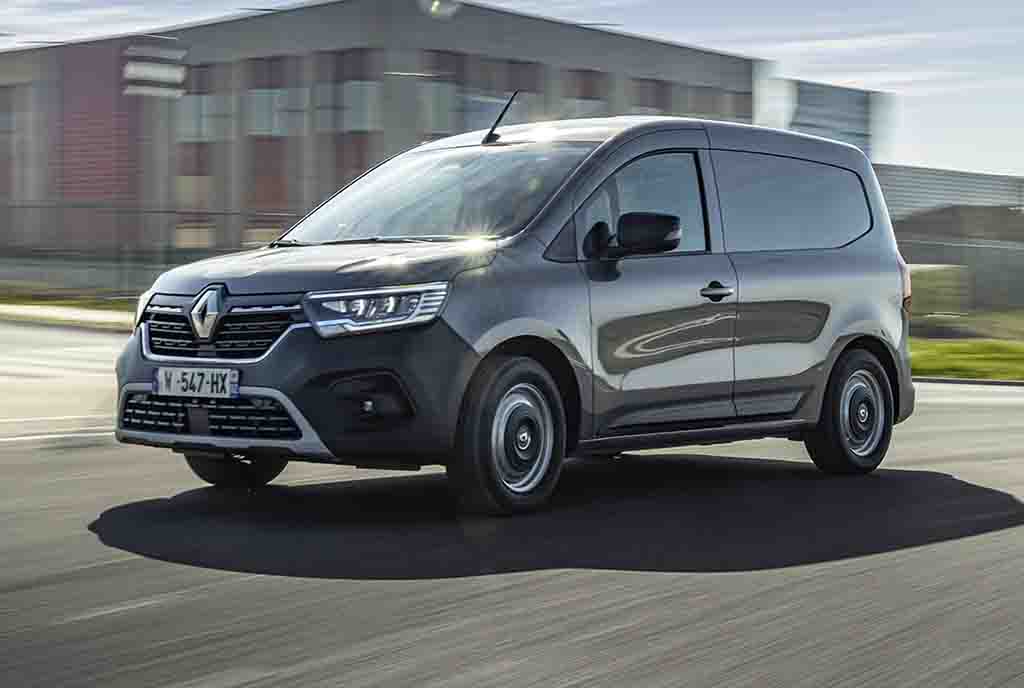 Making a van bigger is only ever going to win you more friends, but Renault hasn't just made the new Renault Kangoo bigger, it's made it smarter with new safety systems, better looking and cleaner and cheaper to run. That's pretty much the holy grail of upgrades, but to be truthful it wasn't going to be hard to improve upon the outgoing Kangoo van which has been looking, feeling and acting its age for a very long time.

An all-new Kangoo van needs an all-new design which means the new model is unrecognisable from the previous version. It’s also been modernised, particularly at the front where it has been brought more into line with the rest of the Renault range, getting a bold new grilled and smart looking “C-shape” headlights that incorporate LED daytime running lights. The rear has been widened and is less of a box on wheels with a slightly flared waistline giving it a broader stance and making it seem a bit more purposeful.

There’s a choice of two petrol engines and three diesel engines with a six-speed manual gearbox or a six-speed dual cluctch automatic transmission available on the Renault Kangoo.

The Renault Kangoo comes in two body sizes with a short- and long-wheelbase version usually called the Kangoo Maxi but referred to currently as the Renault Kangoo Long. Business and Business+ trim levels will continue the current naming pattern for the specification and options. There is also a greener, more environmentally friendly version called Ecoleader which has a speed limiter and Eco Mode button for extra fuel savings. The speed is limited to 68mph and overall fuel consumption is said to be improved by 12%.

As previously mentioned, the Kangoo has got bigger with standard Kangoo vans now getting a loadspace capable of taking 3.3 m3 when they have a solid bulkhead or as much as 3.9m3 when you opt for the swivwelling bulkhead with fold-flat passenger seat. Not only does this increase the overall capacity it also allows you to increase the load length from 1,810mm to 3,053mm. Maximum load height in the Renault Kangoo van is 1,215mm and the width has increased to 1,517mm with the gap between the wheelarches now at 1,247mm.

The longer version of the Kangoo has a load volume of 4.2m3 that increases to 4.9m3  with the swivel bulkhead option.

New safety features on the Renault Kangoo include a Permanent Rear View Assist camera which can be found on the larger Renault Master van. It’s just like a rear view mirror but digital, and while it’s distracting at first you soon get used to it and will marvel at the quality of the picture.

Other driver-assistance systems include Lane Departure Warning, Lane Keeping Assist, Active Blind Spot Monitoring, Autonomous Emergency Braking and Adaptive Cruise Control with Stop & Go – that’s the thing that makes the van seem like it’s driving itself as when you have an automatic gearbox the van will come to a stop in traffic and then restart and pull away as the traffic moves on. Another new feature is EasyPark Assist which gives you hands-free automatic parking automatic parking thanks to the front, rear and side parking sensors.

There’s been a huge leap forward in the way the Renault Kangoo feels on the road. It’s quieter thanks to a more refined engine and there’s a good deal more sound deadening to block out the engine and road noise. It’s become a really pleasant van to be in.

The pick of the engines is the dCi 95 but the Kangoo has plenty of options to choose from.

The ride is quality is another area of improvement, with the Renault Kangoo now feeling more sophisticated and comfortable. The suspension is a bit softer than most other vans but it doesn’t lead to any wallowy feelings when you turn into a corner. Instead it holds itself nicely to the road, with a really direct and responsive steering feel.

It’s not quite in the same league as a Ford Transit Connect, but it is very close to the level of comfort you’d find in the Volkswagen Caddy Cargo – which for the Kangoo is a massive achievement.

The Renault Kangoo has taken a huge leap forward on the interior, not least because it is just so much bigger than the previous version. The overall dimensions have increased but this is most is noticeable when sitting inside at your shoulder, elbow and knee height where there is just so much more room. It’s no longer a cramped feeling interior, with the door too close to your arm and leg, instead there’s now elbow room – enough to throw some shapes while you boogie away to the tunes on your phone which can now be connect with Apple CarPlay and Android Auto.

As well as the Renault Kangoo getting smartphone mirroring, there’s also wireless phone charging and three USB connections. The infotainment system is an 8-inch touchscreen called Easy Link multimedia, and it works well as a standalone system for the radio, phone connection and sat nav, if you’ve opted for it.

Renault has improved the seats which now feel more comfortable and less slab-like than the old ones which weren’t the best for long journeys.

There’s also a decent amount of travel in the driver’s seat, so tall people can get comfortable, especially as the steering wheel is fully adjustable.

The interior has actually taken a big step forward with much better plastics and more tacticle switches that have been borrowed from the passenger car range. Renault calls the buttons beneath the infotainment system a “piano keyboard” which we kind of get but they’re more upmarket than normal push buttons and fit in neatly with the new rotary dials that control the temperature controls.

A new addition is the handsfree card access which replaces a traditional key. Not only does it do keyless entry and start, but it also has an auto-locking function as you step away from the van which is a nice little boost for security.

Should I buy a Renault Kangoo van?

It’s only right to compare the Renault Kangoo against its French siblings, but in doing so you’re pitching it against one of the best little vans on the market. The Citroen Berlingo and Peugeot Partner (which is also badged as the Vauxhall Combo and Toyota Proace City) revolutionised the small van segment with their comfort, performance and quality.

The Kangoo has a huge task to get anywhere near them, but it’s moderately successful. Being slightly bigger is a definite boost – it feels less cramped and more comfortable. The new technology systems bring it into line with even the most advanced vans in the market, and the quieter engine and more sophisticated cabin make the Kangoo feel more premium than before.

In a tightly contested sector, the Kangoo is no longer a poor relative and is in fact a really smart choice for a compact van with intelligent storage and comfort.