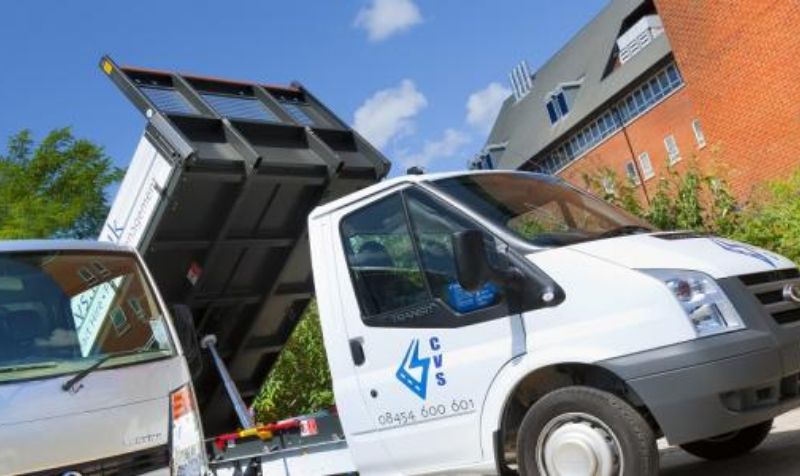 In many ways, comparing forward-control cabs with a conventional front-engined vehicle is extremely unfair. One dominates in terms of payload, while the other is vastly superior when it comes to comfort. There is an obvious winner and a loser, but which is which depends largely on what duties you want your vehicles to perform. Where the two go head-to-head, though, is in the cross over areas – particularly at the lower GVW end of the CV spectrum – where both a cab-over or panel van could quite easily do the job.

Since manufacturers started introducing their own off-the-shelf dropside, refrigerated and tipper models in front-engined vans, operators have had far greater choice. Forward-control stereotypes still remain but front-engined vans are getting a foothold in traditionally cab-over markets, so to really put the cat amongst the pigeons we thought we’d take two of the market leaders in each field at 3.5-tonnes and put them through their paces in the toughest of all working sectors, tipping.

Despite being king amongst panel vans, the Ford Transit is not unfamiliar with the rough requirements of the wider working world. Ford’s One-Stop range has seen the Transit visit box van, curtainsider and dropside markets, in addition to offering a tipper body.

Like the Cabster, the Transit tipper is a versatile workhorse, but the added size of the larger front-engined machine does add weight to the vehicle that in some sectors may mean critical payload is lost. While a maximum payload of 1,123kg for our test vehicle isn’t poor it is still 177kg (16%) less than the Cabstar – despite Ford’s best efforts to reduce weight through an extensive review of the bodywork. As you would expect with a 3.5-tonne Transit load area is high, with a 3,200mm load length and a width of 2064mm.

Our test vehicle was a rental and as such made do without any of the frills normally found on press fleet models. This meant options including satellite navigation (£945) and Bluetooth (£200) were not fitted, making the Transit’s £27,750 list price more comparable to the £21,848 Cabstar. However, the base specification of our test models is where much of the similarities end.

On- or off-road, the Transit’s suspension cushions you capably, whether loaded or unloaded. The steering is precise and informative, and as the forward weight of the engine is balanced out by the mass of the tipper body you don’t feel as though you are at the leading edge of a pendulum as you turn into corners. Running unladen leads to body roll, but adding weight lowers the ride height just enough to make the Transit feel far more civilised and manageable.

The 2.4-litre common-rail diesel engine is smaller than the Cabstar’s 3.0-litre unit and produces less power, just 115hp, however, its torque figure of 310Nm surpasses the Japanese cab-over making the Transit a far more willing companion.

Whereas the Cabstar requires a certain degree of brutishness with the right foot to keep it moving when fully loaded, the Transit can be treated more delicately, and your reward for doing so is that you will not be punished with deafness – the Transit’s engine sounding far more relaxed across the rev-range.

On the inside the Transit’s cabin feels well put together, with a typically hardy steering wheel and firm, satisfying gearshift. The layout is also more conventional and user-friendly with large door pockets, central dash storage and twin glovebox.

When it comes to tipping the Transit makes do without a remote control, Ford preferring a fixed unit positioned to the side of the driver’s seat. It’s easy to use joystick raises and lowers the body, and can be easily operated from inside or outside the cab. Like the Cabstar an emergency override switch is also present, along with a safety catch that mechanically locks the tipper body into place.

All three sides of the load space fold down, to reveal a deck that is fractionally higher than the Cabstar at 995mm from the floor, while the rear gate is also top-hinged.

The Transit has many admirers as a panel van, and as tipper its reputation is not damaged. At nearly 80cms longer than the Cabstar, and more than 20cms wider, this tipper’s size may limit its uses for some, but the merits of this One-Stop conversion would show the Transit’s boundaries are limitless.

Along with the Fuso Canter, the Nissan Cabstar has had the market in light forward-control vehicles for some time. Its looks are synonymous with the hard working city contractor as its carrying capacity far outweighs its humble size. The weapon of choice for many a trade, from landscaper to scaffolder, the Cabstar is famed for its disproportionately high payload. Even as a factory built tipper, our test model can lay claim to an impressive 1300kg payload, while the chassis cab model has a massive maximum allowance of 1,852kg.

The load space available in the rear deck of this tipper is equally noteworthy, with a maximum length of 3,200mm and width of 1,900mm. Four trim levels are available in the range, but tested here is Basic+ trim, which gives you an increased GVW of 3.5-tonnes rather than the 3.4-tonne of the entry-level Basic model. Both trims options give you a tilting cab, however the ‘+’ adds twin rear wheels.

With the engine nestled below you as you sit in the cab, there is sufficient room for the front axle to be positioned right at the forefront of the chassis, giving you not only an excellent turning circle, but also a very precise idea of how close you are to objects in front of you. This is another obvious benefit for those working in confined spaces or busy cities, but it does pose a few problems with ride comfort.

Over-cab models are notoriously uncomfortable, and when empty the Cabstar is certainly no better than any of its rivals. The independent, double wishbone at the front with springs, shock absorbers and stabiliser bar work capably with the parabolic lead springs at the rear, however, only when there is a significant amount of weight in the back do you begin to appreciate that Nissan has made advances in improving the overall ride.

The Cabstar still struggles immensely over speed bumps with back-breaking jolts even at the lowest possible speeds, and you will find yourself kangarooing up and down in your seat if you dip in and out of pot holes, but providing you are mindful of its limitations, during the day-to-day grind there’s nothing to prevent you from having a comfortable journey as long as you’re not running completely empty.

Steering feedback is reassuringly complete, and although you’re not likely to hustle the Cabstar around you can push-on whilst receiving plenty of communication about your connection with the road.

Being a tipper there is also a high probability you will take the Cabstar off the asphalt. With power coming through the twin rear wheels, there’s no need to worry about getting stuck. The Cabstar easily finds traction on loose surfaces, and the 130hp engine with 270Nm of torque can capably haul you and your payload around a site even at 3.5-tonnes.

When it comes to dumping your payload, simple up or down buttons on the robust remote control do the trick, while the ability to use the top or bottom hinged rear flap allows gravels and other items to be easily deposited. Hinged aluminium sides also increase access to the cargo area, which is 950mm off the floor.

For the brave, access to the Cabstar’s interior is via a single step, which due to the intrusion of the wheel arch is strategically positioned well forward of space you need to occupy as a driver. With wet boots, we found mastering the entry process both difficult and dangerous, however, once inside were pleased by the volume of space now offered in the Cabstar. Given the location of the engine the positioning of the five-speed manual transmission – between driver and passenger seat rather than on the dash – is understandable, although it does adversely affect cross-cab access.

Although the seating position is low you do get a great view towards the front and through the enormous wing mirrors that stick out on stalks like snail’s antennae, but if it weren’t for the height adjustable steering wheel we would have struggled to find a enough leg room. An overhead shelf and numerous central recesses provide ample storage, and we particularly like the two decent sized gloveboxes and the smaller central storage area. On the outside there is also a small toolbox locker.

Sadly there is little in the way of sound deadening, so despite the 3.0-litre engine being very capable and impressively economical, at motorway speeds and under acceleration it is painfully loud.

The Cabstar is a vehicle of extreme contracts. Extremely practical and rugged whilst being, at times, extremely uncomfortable.

The price difference of nearly £6,000 between the two tippers is a lot, but if purchase price was the only concern when faced with making a buying decision we might all be living in nicer houses and driving better cars. Unfortunately for the Nissan once you factor in running costs there is a different story to tell, and things even out significantly.

Over the course of our test the Nissan managed a creditable 25.3mpg, while the Transit recorded a slightly higher 25.9mpg. While these figures will vary enormously depending on the nature of your business, they are encouraging figures nonetheless, but whole life costs extend far beyond fuel consumption.

When it comes to vehicles that endure a particularly rough working life, like the average tipper, spare parts also play a massive part in running costs, which is why – according to the Transit’s owners, CVS, they would struggle to justify purchasing a Cabstar.

Not only is the Cabstar’s basket of commonly required spares nearly twice the price of the Transits, according to CVS’s commercial manager John McQue the Cabstar’s appearance also poses a potential problem. McQue says: “It's worth noting that the cost of breaking bits off is higher on the Cabstar. The headlights for example are the size and cost of Mars - an important consideration for the construction industry.” However, it’s not just the headlights that are at risk of damage, the Cabster’s size makes it an ideal inner city work tool, but the wing mirrors are vulnerable. At £318 versus the Transit’s cost of £81 per unit, its little wonder McQue believes the Cabstar isn’t right for rental in the construction business.

Coming from such a petite package the Cabstar’s payload is impressive, but its other ace in the hole – price – is in fact a snake in the grass. As much as the Cabstar reigns supreme in the forward-control community in the wider world there’s no doubting the Transit is still king.