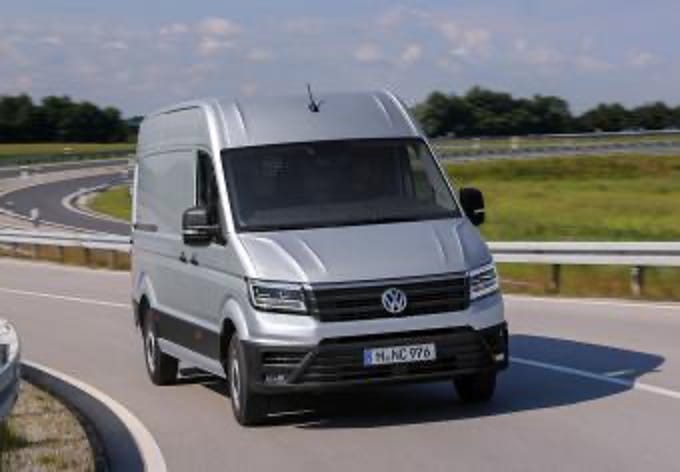 At a time when manufacturers are regularly banding together to produce their latest vehicles and where a new launch can consist of nothing more than a couple of new panels around the front or a new grille shape, it comes as a bit of a surprise when an entirely new vehicle is launched.

The new Volkswagen Crafter is one such product, the result of more than €2bn of investment and the termination of a joint venture deal with Mercedes-Benz that previously saw the VW Crafter very much in the shadows of its Mercedes Sprinter relative.

Released into the limelight, the new Crafter shows all the signs of being a formidable force in the 3.5-tonne large van sector. Development from the ground-up has enabled Volkswagen to think about what their customers needed. Applications from logistics to construction and tradesmen to emergency services were all considered, while special attention was paid to a number of key areas including the development of a new fuel-efficient range of engines, cabin ergonomics and storage, and safety and driver assistance.

Front-wheel-drive Crafter models will occupy a 3-tonne to 4-tonne GVW range, while RWD vans will start at 3.5 tonnes and reach up to 5.5 tonnes. Crafter AWD vans will get the company’s 4Motion badging with vans will be limited to just 3.5-tonne to 4-tonne GVWs, with the new single turbo 101hp and biturbo 174hp the only two engine outputs available. The same brand new 101hp engine is available in FWD models along with a single turbo 138hp or the twin turbo 174hp. RWD buyers get a single turbo engines with 121hp or 138hp, and a twin turbo with 174hp – all of which are mounted longitudinally as opposed to the FWD and AWD van’s transverse arrangement. Single and twin rear wheel models will both be available.

The target audience for the Crafter is understandably broad, and with just reason as the new platform has enabled Volkswagen to introduce front-wheel-drive (FWD) into the vehicle in addition to the rear-wheel-drive (RWD) and all-wheel-drive (AWD) configurations found in the previous model. This, they say, will allow them to approach new customers and improve upon the model’s current 7.4% market share.

A larger range with three drivelines spanning 3.5 tonnes to 5.5 tonnes, with three lengths and three roof heights, it’s a certainty that the new Crafter will be more successful than its predecessor, but its ability to compete with the likes of the Sprinter and the Ford Transit will define it as a good van or a great van. In order to do that it must look the part, play the part and drive the part.

At first glance you may think that not much has changed to the Crafter. It seems familiar, as if nothing much has changed, but when you put the models side by side it will suddenly dawn on you that these are radically different. It seems familiar because the new Crafter is an accomplished upscaling of the Transporter. The old, boxy, utilitarian look of the Crafter has been replaced by a smart, streamlined front that looks every inch part of the VW brand. The bold chrome grille bars merge neatly into the headlamps, the crease lines in the bonnet are sharper, and the sculpted waistline that carries around the vehicle is more flattering to its boxy proportions.

With a well-designed company livery on the side, there’s little doubt that this will be a smart-looking vehicle and large companies will be taken by the idea of a fleet of these.
Vans do of course need to be functional as well as aesthetic, and the FWD versions improve the Crafter’s vital working statistics with an improvement to the maximum payload of the new van thanks to a lower kerb weight.

The front-drive configuration has also enabled the rear loading height to be reduced by 100mm, and carrying volumes improved. To create harmony in the range between Transporter and new Crafter vans, the standard-wheelbase Transporter is now called L1 and the long-wheelbase L2, meaning that short-wheelbase Crafter vans become L3, with L4 the medium-lengths models and L5 the largest long-wheelbase vans. Standard height Transporters are now H1, entry-level Crafter vans become H2 with H3 and H4 for medium and high roofs. Volumes range from 9.9m3 for an L3H2 to 18.3m3 for a L5H4 with the capacity difference between them a massive 85%.

There is great potential for it to be a productive vehicle, and the new front-wheel drivetrain option will decrease the cost of getting a Crafter, opening it to a wider audience than before. Front-wheel-drive is a cheaper engineering solution, so the reduced starting cost will allow Crafter to reach price sensitive fleets. The new 2-litre TDI engine offers improved fuel consumption of up to 42mpg and a reduced total cost of ownership over the outgoing model. Fleets should like it then, but what about the drivers?

One of the most obvious changes is the refinement of the engine. From the outside at an idle the new diesel engine – a reworked version of a unit used by Audi but strengthened for commercial vehicle applications – seems quieter than usual, but step inside the cab and you’ll really notice the difference. There’s a muted thrum from the engine, but its unusually peaceful. It’s all part of VW’s attempts to reduce driver stress and fatigue, and along with ergonomic changes to the interior the general ambience of the Crafter is better.

Our test vehicle is a L3H3 FWD panel van with 138hp and a manual 6-speed transmission, loaded to maximum weight. It’s the van you’d most expect to see on the roads with one of the most popular engines and in short it’s a big improvement on the old model and a real challenger in the sector.

On start up the Crafter is quieter, and as soon as you get on the move you really begin to notice the difference. Similarities between it and the Transporter are obvious, with the Crafter feeling every bit as dynamic as the smaller van. The ride is comfortable, especially with a fully-laden rear, and it demonstrates excellent road holding.

The engine pulls effortlessly from just a few revs above tickover and the performance is smooth and predictable as the turbo winds up. Gear changes using the 6-speed manual transmission are sharp, going through without fuss and with a nice clean action. Braking performance is also impressive and that’s almost certainly because of the 5.5-tonne maximum GVW that the Crafter models come in. Bigger vans mean bigger brakes, and that means when stopping a regular 3.5-tonne panel van there is a lot of retardation from the discs.

The interior is completely new, and it feels like there is much more usable space. There’s open area above the dash – sectioned into three compartments, with two cupholders – while the dashboard itself is split horizontally to create another cup-sized storage section for both driver and passenger. A navigation/infotainment screen fills the central part; its display is crisp and easily readable even with bright light shining across it, and the system itself is logical and easy to use. Like the dash top, the door compartment storage is also split in to three segments, with a narrow top and bottom units and a larger central section big enough for folders or water bottles.

The party piece to the new van, however, is its new electromechanical steering that allows a range of driver assistance functions to feature on the van. The new steering rack is sharp and precise for such a big vehicle and you can both feel like you are really driving the thing when you turn into a bend, or can calmly cruise along a motorway without being jostled by the wheel. It also has the advantage of being more fuel-efficient than an equivalent hydraulic system, but the real benefit is its trick manoeuvring systems with new Driver Alert, Lane Assist, Park Assist and Trailer Assist now all possible as a result of the new system. Other models like the Mercedes-Benz Vito introduced technology to allow the van to park itself more than two years ago, but the Crafter’s Lane Assist which will correct steering to keep you in a straight line and Trailer Assist that automatically steers a trailer into position while reversing using a combination of steering controls and the rear view camera, demonstrate that the Crafter is a leader amongst vans.

In the battle of the big vans there has always been one ruling force. The Mercedes Sprinter is considered the pinnacle of the panel van world, so for Volkswagen to move away from the safety and security of their joint-engineered Crafter/Sprinter was a risky move. There is no doubt VW has succeeded in making a supremely capable and comfortable van, but in doing so have they bettered the Sprinter?

Initial impressions would suggest they have, and if Volkswagen succeed in getting the message out that this is an all-new Crafter that is very much aligned to the quality and feel of a Transporter van, they could soon see the investment paying off, with the Crafter having the potential to become the King of vans.