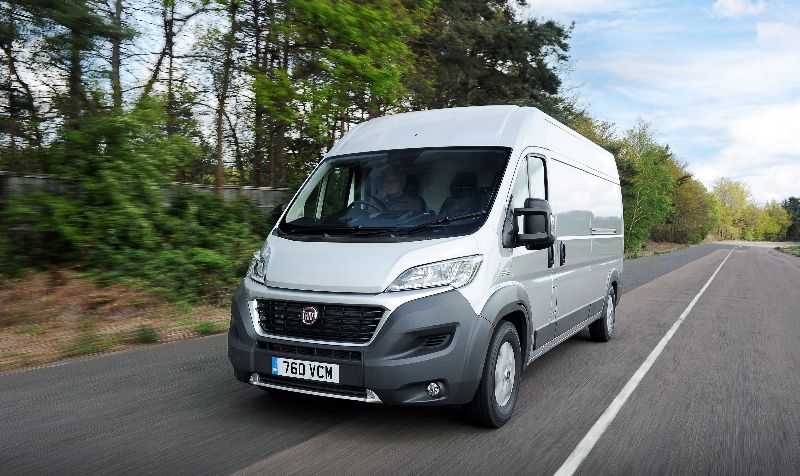 There’s a certain confidence in the way Fiat’s new Ducato was launched, in that it was quiet and very much under the radar. There weren’t any teasers or outlandish marketing spiel, it simply arrived and delivered, and that in a nutshell sums up the ethos of this vehicle.

As a shared product with Peugoet and Citroen, who produce their Boxer and Relay versions of the Ducato, it’s much tougher to convince customers about a new an exciting product when you can pop off to a friendly competitor and buy a near identical version. While Fiat is happy to share the chassis and body panels with its French partners it has an advantage when it comes to engines, with different power outputs and even separate engines.

Fiat’s own common-rail diesel engines provide power across the range with outputs from 110hp to 177hp. There are two engines available, a 2.3-litre with three outputs of 110hp, 129hp and 148hp, and a 3-litre capacity unit producing a range topping 177hp.

These two power units are exclusive to Fiat, and give them a significant advantage not only in the choice available in the range, but also in the crucial area of fuel consumption. Fiat’s most economical engine, the stop/start 129hp unit, powered by the 2.3-litre Multijet engine, claims a combined fuel economy figure of 45.6mpg, bettering Citroen’s best preforming Relay, the 2.2-litre e-HDi 130hp, model by 2.8mpg. While it is only a small margin at the pumps,  on the road that slightly larger capacity engine  (2,287cc v 2,198cc) develops maximum torque 200rpm sooner at 1,800rpm across all three outputs making each of the Fiat engines that little bit more refined to drive.

Ducato also has a trump card in the shape of its 3-litre 177hp engine, a power unit that allows the Ducato to comfortably power its larger GVW models. With weight options from 3 tonnes to 4.2 tonnes, and a range of body variants that include tipper, dropside and chassis cabs, the new Ducato range looks to continue its established tradition of being a reliable chassis at the higher weights. This has seen the Ducato dominate the coach building end of the market with its chassis cab, and it has a dominant stake motorhome conversions as a result. With more than 10,000 different configurations in the Ducato range, which extends from L1H1 to L3H2 models in the regular vans and then on to more heavy-duty Ducato Maxis from L2H2 to L4H3, there is plenty of choice amongst the panel vans too. Add to that the option of a Comfort-Matic automatic transmission, available on all models expect the entry-level 110hp engine and a replacement for the standard 6-speed manual gearbox, and Fiat has a truly complete offering few can compete with.

Payloads have increased, and the range now offers capacities from 800kg to 2,100kg,  thanks to a new composite leaf-springs reducing rear suspension weight by 15kg, and increasing rear axle payload up to 2,500kg in 4.2 tonne models. Its 2,100kg capacity is also the largest of any single wheel van, while its 17m3 capacity is at the higher end of the 3.5-tonne sector.

What else has changed on the Ducato? Revisions to the front are apparent, with a new grille design to mark this sixth revision of the Ducato name, while the interior has also had a revamp. The inside now feels better put together, and greater thought has been put into the finish of the vehicle. The Ducato isn’t quite up there with Mercedes-Benz’s Sprinter, but this is now a solid van.

Service intervals are also up, and now stand at an impressive 30,000 miles. There’s also a new clutch system, tweaked front suspension and upgraded brakes to go with stronger door hinges and body panel reinforcements, all of which should help prolong the life of the vehicle.

It doesn’t stop there either, additional Ducato models will also be added to the line-up with a 4.3m wheelbase Ducato chassis cab and a new CNG model arriving this year. Fiat also has Euro-6 to consider, and its range of compliant powertrains, using SCR, will also be available to order by the end of Q1 with a new 180hp engine will be added to the range as part of the Euro-6 updates.

Safety continues to improve, with more equipment featuring as standard on the Ducato than ever before. There’s a driver’s airbag, ABS with electronic brakeforce distribution and electronic stability control all fitted as standard, as well as driver aids like Roll-Over Mitigation and Load Adaptive Control to improve stability. Hill hold and anti-slip regulation (ASR) are also included. It’s an impressive package that can be added to with further safety enhancements such as hill descent control, traffic sign recognition system to warn of speed limits, and Lane Departure Warning System.

Fiat has been making waves in the public sector with its Doblo city van – an affordable and competitive product with a big capacity for volume and payload – and now it is the turn of the Ducato. Fuel economy and its own engines will help elevate the Ducato above its Peugeot and Citroen siblings in the pecking order, but buyers should not under estimate the efforts of the Fiat Professional network to ensure support is available. Their reputation has grown thanks to a slow and steady appreciation for its products in all areas where vans are needed. Reliability has improved as well and so too has dealer support and coverage – there are now 1,500 across Europe and 149 in the UK.

This in tern has allowed Fiat to offer Ducato with a 24 month unlimited mileage or three-year 120,000 mile warranty. Importantly when it comes to servicing and repair, the range is supported by an array of dealers from a HGV background (courtesy of group partner Iveco) that offer longer opening and service hours. Top of the range Tecnico models now also get three years free servicing too.

This is undoubtedly the best Ducato yet, but crucially it arrives at a time when Fiat Professional has made real progress in the UK. On its own the Ducato is an impressive van, but with the support that it is now receiving from the Fiat network, expect the Italian underdog to take a real and deserved piece of the action.