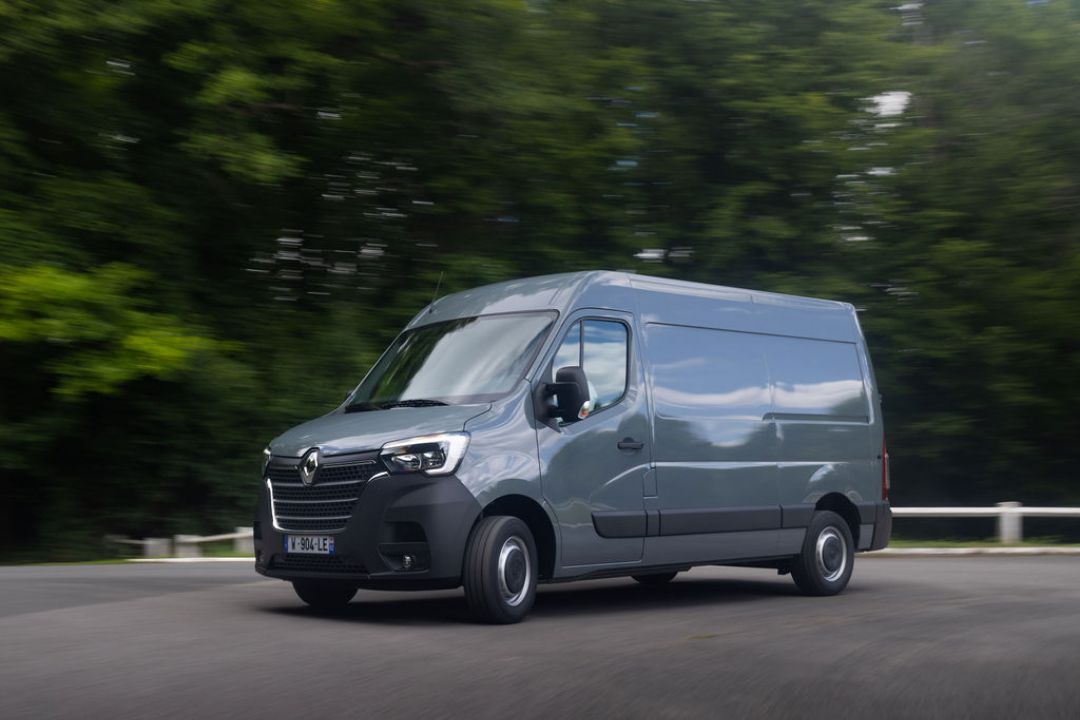 The E-Tech range has a new member and it’s the turn of the large van Renault Master E-Tech to be electrified and rebranded.

A large electric Master van has been around for a number of years but had been previously going under the name of the Renault Master ZE where it shared many of its electrical components with the smaller city van Renault Kangoo ZE. This new Renault Master E-Tech doesn’t share the latest Renault Kangoo E-Tech’s driveline and is much simpler electric vehicle.

What motor and battery does the Renault Master E-Tech have?

The Master E-Tech uses the same 57kW electric motor used by the previous model, delivering 76hp and 225Nm of torque. That’s not a great deal of power for a large van, a criticism that has long been levelled at the electric Master van. Fortunatley the major improvement of this new generation van is a larger battery. Out goes the 33kWh battery pack and the Master E-Tech now gets a 52kWh battery giving it a claimed WLTP range of 124 miles.

There are two ways of charging the electric Master and the bad news is that neither is as fast as the competition.

The Master E-Tech doesn’t support rapid charging but it does do moderately fast DC charging capacity of 22kW. If you need to charge with an AC single-phase charger it will allow 7.4kW charges and of course you can still use a domestic 3.7kW supply.

Charge times are sluggish. A 7.4kW wallbox will take around five hours for the Master E-Tech to reach 80% charge. That doubles to more than 10 hours on a domestic 3.7kW supply. The 22kW DC charger is a little better with 31 miles (50km) of range able to be added in 45 minutes.

What versions of the Master E-Tech are available?

Arguably the biggest improvement to the Master E-Tech range is that there is now a lot more choice to be had. The previous model was only available in six different variations but Renault has increased the number of Master E-Tech vans to 15 models with three different lengths, three heights and three gross vehicle weights of up to 3.8-tonnes. There will also be dropside, tipper and Luton vans.

How much weight can it carry and what size is it?

That will ensure that the payloads of the Master E-Tech are in excess of 1.2 tonnes while load volumes for the big electric Renault range from 8m3 to 15m3.

If you’re in need of a Renault Master E-Tech chassis there are also two different sizes of chassis cabs available.

With an electric vehicle you either get a very different, often quirky interior or you get something that is exactly the same as the diesel van. The Master E-Tech interior sits in the latter camp with the addition of a few different dials showing battery range and how much power you're using along with and some leftover ZE branding that was used on the previous model. There's not a great deal that has changed then.

The Master interior is dominated by grey plastics but as drab as that might sound it’s not a miserable environment and is actually rather spacious and smart. There’s a 7-inch central R-Link Evolution infotainment screen which allows smartphone mirroring with Apple CarPlay and Android Auto along with a digital tablet docking station. The infotainment system can pair to Bluetooth devices and has a DAB Radio.

The seats are comfortable but firm and quite upright which is fine for short periods but can become tiresome on a long journey. They’re also quite high compared to the Master's relatively low dash. It’s not a problem and does actually give you a very good view out of the cabin. Visibility all round is generally good, thanks to large mirrors.

There’s also a fold-down central seat, giving you cupholders, some shallow storage areas and a flat surface that doubles as a laptop holder with a swivelling tray which some drivers may find useful.

Storage is decent with a tray to the side of the gear lever which also does induction wirless charging for your phone, and there's a larger tray on the other side of the steering wheel. Cup holders can be found near to the A-pillars.

Is the Renault Master E-Tech any good to drive?

Driving the Renault Master E-Tech is like driving any large van, that’s to say it is quiet with a better ride than its diesel equivalent. That’s because the weight of the batteries is spread across the length of the van and low down beneath the chassis. That not only means the loadspace is unchanged from the diesel vans with no additional loading height either, but it actually improves the handling because of the lower centre of gravity. As a result the Master E-Tech drives very well. The suspension is still firm but you get a lot of feedback through the steering.

There’s some road noise, and you can hear a bit of wind whizzing past the A-pillar when you get closer to its 55mph top speed but it’s not overly distracting or annoying.

Does the Renault Master E-Tech have driving modes and regenerative braking?

To help improve range, there’s an Eco mode button located in the centre console of the dashboard. It limits the power of the large van, making the acceleration less severe and ultimately preserving the range. If you’ve got a heavy right foot, it’s a good idea to use it, but it does dull down the Master’s performance by around 25% which for a large van, possibly with a heavy load, makes a big difference – especially as the Master E-Tech only has a 57kWh motor, the equivalent to 76hp.

There are no regenerative braking modes or any other driving modes, but the Renault Master E-Tech does have a decent level of regenerative braking as standard. It’s enough to gradually slow the van when you lift off the accelerator – much like how regular engine braking would slow down a diesel van.

What safety systems does the Master E-Tech have?

There are plenty of safety features in the Master E-Tech that include Lane Departure Warning, Rear Parking Assistance, reversing camera rear and view camera that replaces the rear view mirror to give a view behind. Its ADAS (Advanced Driver Assistance Systems) include:

The Renault Master E-Tech is not made in Batilly in France, which is the home of the diesel-engined Master van as well as where the Nissan Interstar is built. The basic body in white van is transferred to the Gretz-Armainvilliers site near Paris where electrification of the vehicle is carried out. The Renault Master plant at Batilly plant has 2,700 employees and accounts for nearly 5,000 indirect jobs in the local economy and the Master has an impressive 84% local content from suppliers that are based in France. The Renault Master is also made in Curitiba in Brazil.  The electric motor and charging units for the Master E-Tech electric van are all made at Renault's Cleon factory in Normandy. The battery is assembled at the Flins plant.

Should I buy an electric Renault Master E-Tech?

Bigger batteries to improve the range were certainly required for the Renault Master E-Tech to be able to keep up with the competition. The Ford E-Transit has set a new benchmark for big vans with its two power ratings, 25 body variants and large batteries that give it more than 250 miles in range. The Master E-Tech looks decidedly old-hat in comparison. In fact, it doesn't even match up to the Maxus E Deliver 9 which most would see as more of a traditional competitor. The E Deliver 9 also has more power, and a greater range as well as a similar amonut of body options.

More range was certainly the top requirement for a new electric Master van, but when compared to the improvements in the Kangoo, not to mention the power, the Master E-Tech feels a bit lacklustre. While the Kangoo E-Tech can now capably compete in the small van sector, the Master E-Tech (even with its increased body size range) remains behind the times compared to rivals that offer more choice and equipment.

The Master is a practical van and with an increased number of variants the electric Master E-Tech will appeal to an even wider audience.