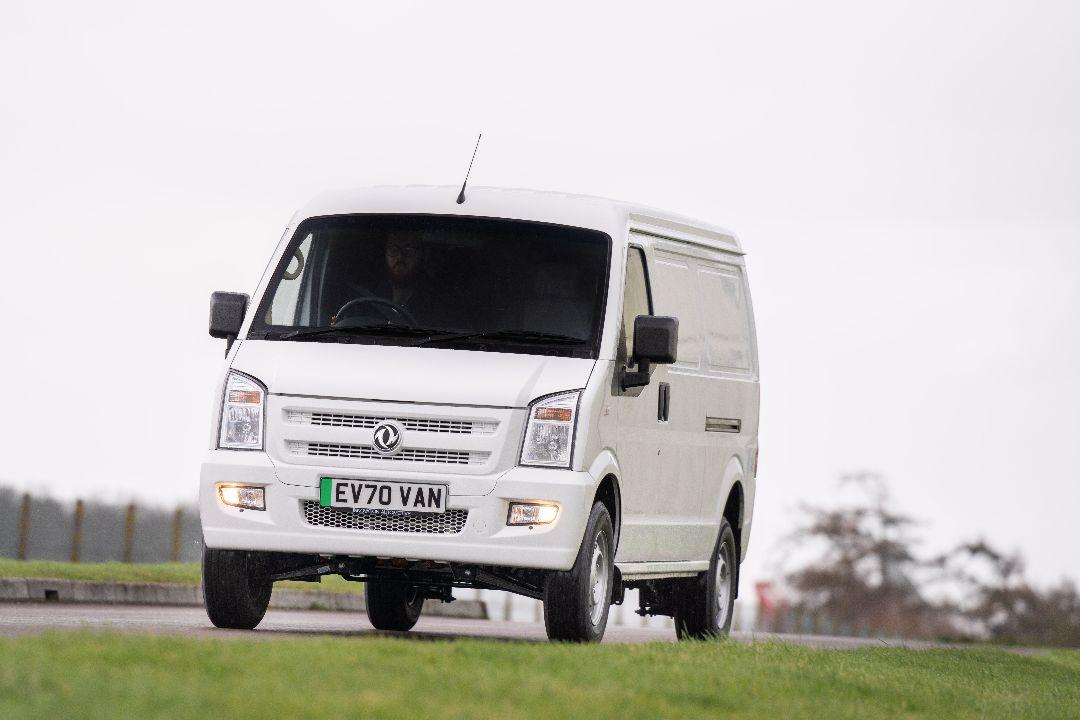 Electric vans don’t have to be expensive or at least that’s the message you get from the DFSK EC35.

If that name is familiar that’s because DFSK has been around in the UK for quite some time. It launched over a decade ago with the DFSK Loadhopper, a small petrol-powered midi-van. It also had something of a passing resemblance to BMWs of the time with its kidney grilles.

The looks might have changed, this new DFSK EC35 looks much more like a typical Japanese microvan that its predecessor, but it is still fighting it out at a price point no one else can come near. You'll be able to buy roughly two of these EC35’s or one Volkswagen ID Buzz Cargo.

And it is the VW which this little van is most similar to in size. It fills the gap left in the market by the now discontinued Nissan ENV200 and is essentially like every other cheap Chinese import the van market has received. It's also eerily similar to the LDV V80 in its material usage and styling, which if sales are anything to go by won't be a bad thing for its UK importers, Innovation Automotive.

Payload is equally impressive for a little van. The DFSK EC35 has a payload of 1015kg. Not bad for a van with a gross vehicle weight of 2600kg and a kerbweight of just 1585kg.

It has a rear tailgate, hinged at the top, which allows for a maximum opening of 1250mm. There are also twin sliding rear doors. The loadspace is lined with ply, to protect the body, and UK vans get non-slip rubber flooring. One thing they are missing however is a series of lashing points across the load space.

What is the range of the DFSK EC35? And how powerful it is?

Power comes from a 60kW motor and is paired to a 39kWh lithium-ion battery. That means the EC35 has a total of 80hp and delivers 200Nm of talk.

It has a claimed range of 101 miles or 166 miles on which of the two maximum speed limits you choose. The lower range of 101 miles is WLTP tested on a van that has a limited top speed of 62 mph. The 166-mile range is for a vehicle with a 50mph limit.

The DFSK EC35 is able to be charged at a maximum rate of 40kW, which will see the battery charge from zero to 80% in just 60 minutes. A full fast charge on a 40kW charger will take 90 minutes, while charging from a 7kW wall box will take 6 hours.

The DFSK EC35’s cabin is quite minimalistic and again reminiscent of a 90s era Japanese car with some very outdated looking heating and air conditioning controls, not to mention the dials and steering wheel itself. Having said that, no 90s car would have been found with an eye catching Grundig 6.8-inch touchscreen infotainment system. It has smartphone mirroring, allowing Apple CarPlay and Android Auto, as well as a DAB digital radio and Bluetooth connectivity.

Parking sensors are fitted as standard, and there is a rear reversing camera that is shown on the touch screen.

Truth be told, it is quite a generous level of equipment for a van costing just 20 grand. That's after some discounts from the Plug-In Van Grant.

It's not, however, the most interesting of places to be and while the seats are comfortable and allow for a good amount of space in such a small van, the plastics are both rather shiny and drab at the same time. The controls around the steering wheel feel a bit flimsy too.

You can get comfortable, depsite the steering not being adjustable, but the narrow cabin does mean your legs will feel a little cramped in the footwell. Unlike many other vans, it is also only a two seater.

As we've mentioned the pedals, its worth nothing that they don't quite seem to line up with where you'd expect them to be and the brake is a little awkward to get to.

There's very little in the way of storage, with super skinny door pockets and just a small key sized cubbyhole next to your right knee. The remainder of the storage options are trace found in the dash, with a sculpted area ahead of you and above the central dash column. Two cup holders will likely bear the bread of your storage needs, as will a fairly generous sized glovebox.

Is the DFSK EC35 any good to drive?

Driving the DFSK EC35 is a very mixed bag. For an electric van it is relatively slow. But this isn't meant to set your pants on fire or be buzzing around at high speeds. We estimate 0 to 60mph took around 22 seconds. That's probably not all that bad for a van that was partially laden with around 25% of its load capacity.

Up to 20 mph the van makes a warning noise alerting pedestrians and other road users of the vans presence. This makes the van actually quite noisy at low speeds. The high pitched note of the warning does become quite invasive after a while.

A second version of the van we drove seemed less intrusive, but it was still getting on our nerves.

After 20 mph and up to around 30mph the DFSK EC35 is actually a rather enjoyable little van to drive. It becomes quiet, and you can then exploit its nimbleness. This is definitely its sweet spot.

Given its size you will be shooting through allsorts of little gaps, and enjoying its quirky charm.

It must be pretty bad on the motorway then?

You'd think so, especially after 30mph where the ride can become really quite bouncy but it's not all bad.

It's not particularly good either, especially in the corners, with a good amount of body roll, and where the light steering (ideal for towns) does make the act of driving it feel a little vague and unsettling. In summary, show this a twisty country road and we'd sooner catch the bus.

Unusually for such a basic van, and one that performs disappointingly at mid-range speeds, the EC35 is actually perfectly acceptable when kept at a constant speed. Buzzing along at its 62mph maximum is not unlike any other electric vehicle. It's just a little noisier from a lack of sound deadening. You won't want to eat up lots of motorway miles in it, but it can be done without too much discomfort.

OK, so the major issue at all speeds is that there is a little more noise than you would get in a more refined product from the likes of Peugeot, Citroen or Volkswagen... but that is what radios were invented for, right?

Visibiilty is good, though, with no really tricky blindspots and although the mirrors look a little ungainly they do their job well, and are aided by the sensors and camera when in reverse.

What about regenerative braking?

One curious feature is that for an electric vehicle it has no regenerative braking to speak of. While we are told that the lower the range gets, the greater the region becomes, it was not obvious that much was happening. That's not a problem, you will just find yourself coasting a lot further and for longer than you would in any of its rivals like the aformentioned Volkswagen ID Buzz Cargo, Peugeot e-Partner or Vauxhall Combo-e.

The it's hard to not criticise the EC35 when taken in the context of the fast changing electric van market. New vans are pushing the segment forward but the EC35 isn't meant to be keeping pace with the likes of the Ford E-Transit.

It does instead offer a different and more accessible route to electric vehicle van ownership. The Loadhopper was something of a niche product, but where it did find success was with local councils. The EC35 will likely find itself in the same spot. You could well imagine one of these trundling its way around a council park. The electric drivetrain suits the van, and if you need a vehicle to exist in the city the DFSK EC35 could well be up your street.

Generous levels of standard equipment, including the touch screen and reversing camera, make this little electric van an absolute bargain. Throw in the EC35's five-year/75,000-mile warranty, with the battery is for eight years or 100,000 miles and you've got some exceptionally cheap motoring on your hands.