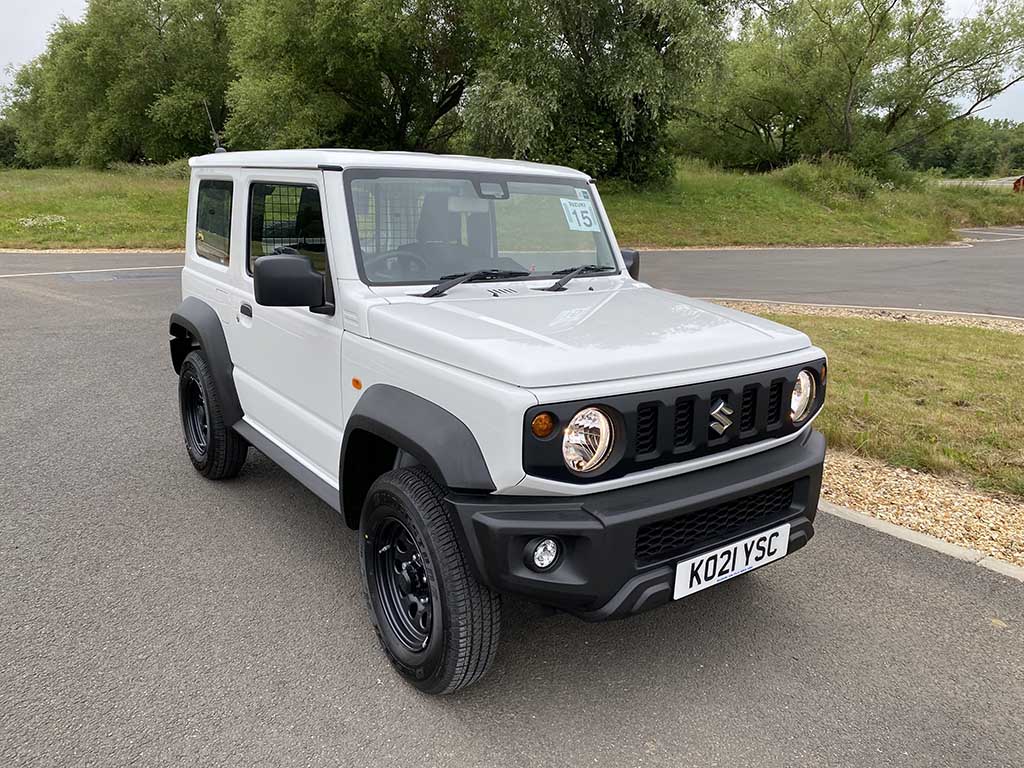 That infamous semi-nude magazine cover of Kim Kardashian might have claimed she broke the internet but we’re pretty sure the Suzuki Jimny came close a few years later and now the Suzuki Jimny LCV has the chance to do it all over again.

After two decades in production the third generation model was replaced by an all-new rough and tumble off-roader prompting fanboys and girls to melt at its cuteness and capability.

But evil emissions bureaucrats had to spoil the party and with the Jimny car unable to meet the EU’s clean engine requirements it looked like the end of the road for the loveable little 4x4. Until the idea of a Suzuki Jimny van emerged.

Now only available with two-seats and a loadspace, rather than some back seats, the Suzuki Jimny LCV is ready to build a whole new fanclub in the van world with a low-low starting price for a 4x4 and tonnes of off-road prowess.

While it may look like a miniature Mercedes-Benz G-Class, it more closely mirrors the old Land Rover Defender in its bare bones, back-to-basic body.

The cabin is simple and utilitarian, its styling is retro and clean, while the loadspace is a flat carpeted floor that sits neatly at the door lip height. As car-derived van conversions go, it’s not ground-breaking, but it will definitely be popular.

What engine does the Jimny LCV have?

Like the passenger car, power comes from a 1.5-litre four-cylinder petrol engine, that produces a modest 100hp and 130Nm of torque. It doesn’t sound like much, but you have to keep in mind that the Jimny weighs just over a tonne, and is so small that you can touch the other side of the vehicle while seated and without even stretching.

It’s mounted to a ladder frame chassis and there’s three-link rigid suspension with coil springs to help smooth out the rough stuff on the road (or off it).

The Suzuki Jimny doesn’t have a locking differential, but there is an electronic traction control system to intervene when it thinks you’re losing grip.

While the rear seats in the passenger car are more ideally suited to children, or adults with really short legs, it does mean that the capacity in the new loadspace is a bit limited.

There’s just 916mm front-to-back which is enough to make the Jimny commercial van qualify as an N1 vehicle and therefore commercial vehicle rates of road tax and the option to claim back the VAT.

That ensures that this really will be one of the cheapest vans (as well as 4x4s) on the road. In comparision, it’s closest 4x4 rival is the Dacia Duster 4x4 Commercial which as a front-wheel-drive model is still around £6000 more and closer to £8500 with four-wheel-drive. In contrast, the Fiat Fiorino – it’s closest rival in size – is not a 4x4 and comes in at a few grand less. The Suzuki Jimny LCV is then in a commercial wilderness of its own.

In order to create the loadspace, Suzuki has shifted the front seats forward by 10mm while also fixing a part solid and mesh bulkhead to protect the driver and passenger from the cargo area. In doing so, they’ve created a 0.86m3 load volume which is roughly the size of a Ford Fiesta van and half the size of a Dacia Duster Commercial’s loadspace.

It’s a quality conversion, though, and one which fits naturally with the Jimny being a three-door. While the loadspace is lined with a coarse carpet, we can’t help but feel that it’s not really on point for the sort of work this little off-roader would normally be tasked with – namely having dirty things chucked in the back of it. In its favour is a 12v socket on the rear pillar and a hidden compartment under the flooring for tyre-changing tools – with the spare wheel bolted to the back door (just in case you haven’t spotted it).

What’s the Suzuki Jimny LCV like in the front?

The interior is a mixture of Land Rover Defender and 90s Japanese hatchback, with some wonderfully chunky dials and switches in swathes of plastic.

As a commercial vehicle it ticks all the boxes you could need, appearing to be both hard-wearing and functional.

The gear lever is amusingly vague and sits next to the almost awkward and apologetically small low ratio selector, while the handbrake and adjoining storage compartment give us a hint of early Nissan Micra. It’s not a bad thing, it just adds to the nostalgia and retro appeal.

Storage is at a real premium as along with the tray beside the handbrake there is just one more at the bottom of the dash console. The glovebox is much better, and you’d struggle to get a cigarette packet in the slender door pockets.

But a substantial grab handle in front of the passenger reminds you you’re in a proper off-roader, so you can forgive it and it’s bare bones equipment whose highlights include a multifunction steering wheel, air conditioning and electric mirrors.

There’s also a DAB radio with Bluetooth, rather than the 7in touchscreen you get in the top-spec passenger car version.

Well, if the passenger car version is anything to go by it’s great, but in truth we didn’t drive the van version off-road because we knew it would be bloody good. It’s simplicity and light kerbweight make this a formidable 4x4, only hampered by its size in overcoming anything that will challenge its 210mm ground clearance.

How is the Jimny commercial on the road?

It might have cruise control and speed limiter fitted as standard but the Suzuki Jimny LCV isn’t the sort of van you’d want to set at 70mph and eat up the miles in. For starters it is way too noisy, huming away at 3,500rpm at 70mph. It’s also really quite bouncy on the road. The suspension is firm but the body isn’t well controlled which means that it pitches and leans into corners making the ride quite unsettling.

The Jimny commercial is far more suited to a slower pace of life where it will cope better with bad British roads and bends.

While the traction control might be great at keeping you moving while off-road it can also be a little bit curt when on the road, kicking in all too often with a sharp kick to correct some slip. You’ll get used to driving it, and it won’t be a problem.

Is the Suzuki Jimny LCV a proper van?

Technically yes. In reality. Hell no.

It has a 150kg payload which is about the equivalent weight of that big bloke Dave from down the pub and his lunchbox - but don't tell him we said that. While the van is plated at nearly 1.5-tonnes (and it weight less than 1.1 tonnes) by the time you add an allowance for the driver and some fuel, it’s only possible to hit about 270kg and then Suzuki tells us it can’t do that anyway because of the rear axle weights. So, best to keep things light and adhere to that disappointingly small payload.

Should I buy a Jimny LCV van?

If you’re not after a proper van, you need to go off-road occasionally and you don’t want to do dual carriageway or motorways more than once in a blue moon then absolutely!

If you need to carry proper amounts of weight or move anything bigger than a medium-sized cardboard box then… no.